The Rise of Renewable Energy in the Automobile Industry

This move is good news for both manufacturers, consumers, and climate change activists. In this post, we'll walk through the strides OEMs are making and the trends in this new shift.

What are the Key Drivers of the Renewable Energy Shift?

Automakers have become the new renewable energy investors, with several of them making sustainability a core part of their business strategy. Three key trends are driving this shift.

Let's examine each in detail.

For years, the world's climate change agenda was guided by the standards of the 2015 Paris Agreement: restricting global average temperatures to 2°C. However, the recent virtual Leaders Climate Change summit attended by 40 world leaders has ratcheted up commitments of various nations.

The US, through President Biden, committed to a 50-52 percent reduction from 2005 levels in economy-wide net greenhouse gas pollution in 2030. The plan sets out to address carbon pollution from industrial processes and to reduce carbon pollution from the transportation sector. Automakers risk severe fines and penalties if they do not stick to regulations such as the Clean Air Act that spell out emission limits.

In a fact sheet, the government has outlined a $15 billion investment to boost the production of electric vehicles and a network of 500,000 charging stations across the nation. The US is not alone in this venture. Countries such as France, Denmark, and Sweden are pushing towards the progressive elimination of internal combustion engine (ICE) vehicles by 2040.

Norway and the Netherlands have taken it a notch higher by wanting all commercial and passenger cars to have zero emissions in less than five years. The former also aim for 75% of new long-distance coaches and 50% of new trucks sold to be zero-emission by 2030. Read more about these plans here.

Consumer demand for sustainable vehicles has been on the increase for years. This trend is no surprise because of the push by governments, communities, scientists, and climate change activists to reduce greenhouse emissions.

In fact, according to research by McKinsey and Company, COVID-19 has increased interest in low emission transportation. Many consumers, especially in North America, are now interested in battery electric vehicles and partial-hybrid electric vehicles.

This shift is also affecting commercial transport. More than half of consumers now believe that transport and delivery of goods should shift from vehicles with internal combustion engines (ICE) to BEVs or H2EVs.

Automakers and companies involved in global supply chain management are responding to the demand for sustainable cars.

The automotive industry has not had a good reputation regarding the sustainability of its vehicles. There have been many scandals involving automakers exploiting loopholes and taking advantage of weak regulation.

Take the Dieselgate scandal, for instance. For nearly a decade, Volkswagen embedded defeat devices in 11 million devices, a gross violation of the Clean Air Act. The company ended up paying over $30 million in fines.

These days, consumers like to know the track record of auto companies before making a car purchase. According to the 2020 Automotive Reputation Report, brands can increase their sales volume by increasing their reputation score.

The advantages of electric cars are endless. Not only are they devoid of noise and pollution, but they are way cheaper than fossil fuel-powered cars. In 2020, 1.3 million EVs were sold in China and Europe, constituting an increase in the global sales of these cars by 39%. Electric vehicles are projected to represent one-half of all passenger cars sold by 2021. 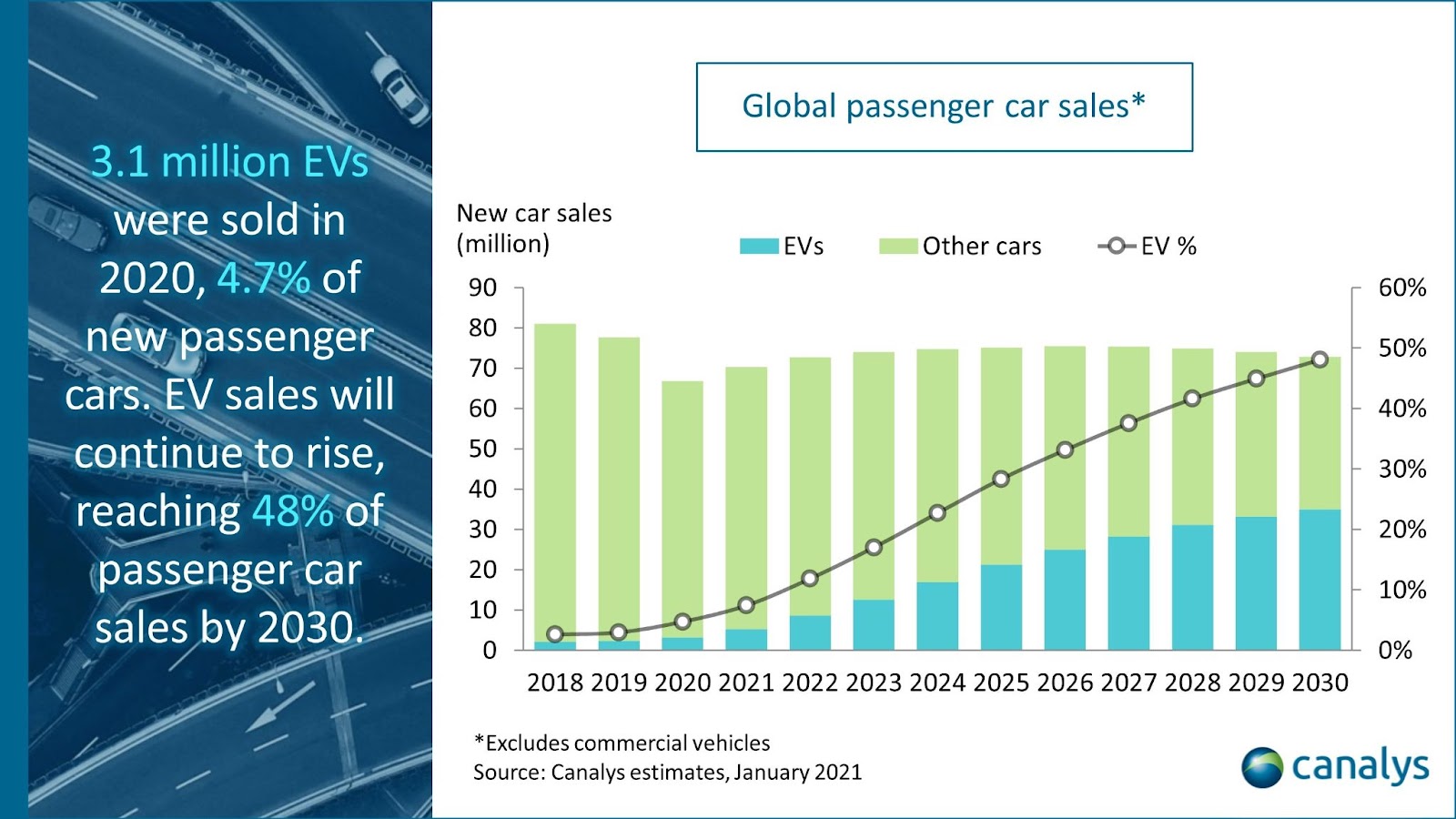 Tesla was the brand that had the most electric cars. They racked up a total sales of almost 50,000 vehicles. The rise in sales is primarily due to government policies such as green recovery and the Paris Agreement, which sought to reduce carbon emissions and restrict the global average temperatures to below 2°C.

Renewable energy has powered some of the groundbreaking projects in the automobile industry, such as the TOGETHER-Strategy 2025 program by Volkswagen Sachsen GmbH. The company has the sole aim of providing electronic mobility for its customers to ensure positive eco-impact.

For decades, many manufacturers have turned to additive manufacturing or 3D printing as it is commonly known. 3D printing involves the binding of material together until its frame matches the designated 3D model data.

3D printing was first used to create automotive prototypes to check their frame and fit. But now, several modifications have been made to move past the primary production of prototypes to the customization, model designing, and testing of final user parts.

The automobile industry has transformed the way vehicles are produced. Leading car manufacturers such as Ford, Volkswagen, and others have created 3D printing technologies to produce additive cars.

Cloud technology entails moving your data to the internet using remote servers. It has already benefited several industries, and the automobile industry is no different. It is no surprise that the global market size for cloud computing in the automotive industry is anticipated to reach USD 9.62 billion by 2025.

This is mainly because cloud computing has enabled manufacturers to deliver their foresight and contribute to flexible business models in the supply chain. The technology has allowed the industry to reorganize the manufacturing procedure and change the operation of its entities.

A few days ago, South Korean carmakers Hyundai and Kia decided to invest $7.4billion into their companies in the United States to commence expansion and electric vehicle production plans. Sean Yoon, CEO of Kia North America, said, "One key element of Kia's transformation is transitioning from internal combustion engine to electrification."

The automobile manufacturers have fully embraced renewable energy sources to the extent that it is not a battle of automobile companies anymore. Smartphone giants are getting in on the action as well. Huawei, Xiaomi, and Baidu have all revealed their car-making plans. Recently, Huawei invested 1billion in EVs and its self-driving technology.

The renewable energy shift in the automotive sector is no fluke: it's here to stay, and automobile companies must be ready to adopt renewable technologies for the long haul. Automakers who make this shift will enjoy it.

They must be ready to partner with sustainable suppliers in the automobile supply chain to drive production, innovation, and profits. In the future, EVs are sure to become a vital feature of the car industry.

Automakers who make this shift will enjoy favorable gains such as a substantial reduction in toxic or carbon emissions, lesser use of fossil fuels, and also contributing to the green recovery agenda. The longer auto-companies, at all levels in the supply chain, wait to adopt these changes, the more they lose ground on their competitors.