Dengue Fever Cut Down by 77% With Groundbreaking Bacteria-Armed Mosquitoes

Scientists found that dengue fever cases have decreased by 77% in a groundbreaking trial that took place in Yogyakarta City, Indonesia.

They used Wolbachia-infected mosquitoes that reduced their ability to spread the dengue fever. The team at the World Mosquito Program said that this could be a solution to dengue fever that is prevalent around the world. 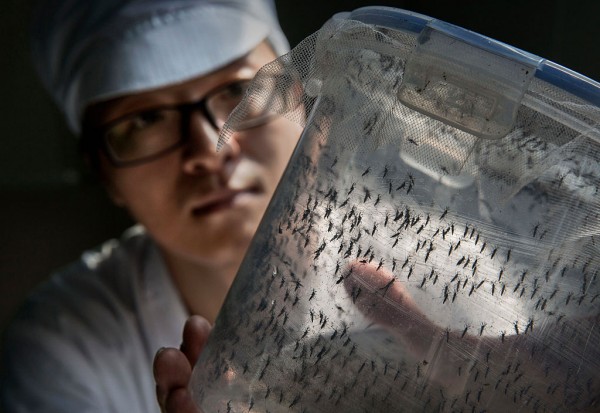 (Photo: Getty Images)
Chinese Ph.D. student and researcher Zhang Dongjing displays a container of sterile adult male mosquitos that are ready to be released in a lab in the Mass Production Facility at the Sun Yat-Sen University-Michigan University Joint Center of Vector Control for Tropical Disease on June 20, 2016, in Guangzhou, China. Considered the world's largest mosquito factory, the laboratory raises millions of male mosquitos for research that could prove key to the race to prevent the spread of the Zika virus. The lab's mosquitos are infected with a strain of Wolbachia pipientis, a common bacterium shown to inhibit Zika and related viruses, including dengue fever.

In the past 50 years, the global incidence of dengue fever has dramatically risen, with an estimated 100 to 400 million cases each year, the World Health Organization reported. It is estimated that around 50% of the world's population is at risk of dengue fever.

Dr. Davidosn H. Hamer, a professor of global health from Boston University School of Public Health, said that the incidence of dengue fever has doubled since 1990. Urbanization, population growth, and environmental conditions that are conducive for mosquito breeding are the most notable cases of the rise of dengue cases worldwide, Healio reported.

Control measures for Aedes aegypti mosquitoes, the carrier of dengue fever, have been considered by scientists. Although there has been one approved dengue vaccine that protects from all four serotypes of dengue fever, it has yet gained recommendations for wide use.

Dr. Katie Anders, one of the researchers, described the trial of using Wolbachia-infected mosquitoes in Indonesia as a "naturally miraculous" solution.

Wolbachia is a virus-fighting bacteria that has been approved since 2017 by the Environmental Protection Agency (EPA) for use in the United States. Other interventions, like genetically modified mosquitoes, are also used to combat dengue fever and other diseases caused by mosquitoes.

According to BBC News, Wolbachia does not harm the mosquito, but it will only be stored in the same parts of the mosquito's body where the dengue virus is kept. It competes for the resources, preventing the dengue virus to replicate, and therefore the mosquito is less likely to cause the infection when it bites.

Moreover, Wolbachia bacteria can also manipulate and alter the fertility of their hosts. They make sure that they are passed on to the next generation of mosquitoes, which means they are established and should stick around for a long time to continue their protective abilities against dengue fever.

The trial used about five million mosquito eggs that are infected with Wolbachia bacteria. These eggs were placed inside buckets of water in Yogyakarta City for two weeks. It took around nine months to build up a Wolbachia-infected mosquito population.

The study, "Efficacy of Wolbachia-Infected Mosquito Deployments for the Control of Dengue," published in the New England Journal of Medicine, showed a 77% reduction in dengue fever cases and also an 86% reduction in people who needed hospital care when Wolbachia-infected mosquitoes were released.

"It's very exciting; it's better than we could have hoped for," Dr. Anders told the BBC.