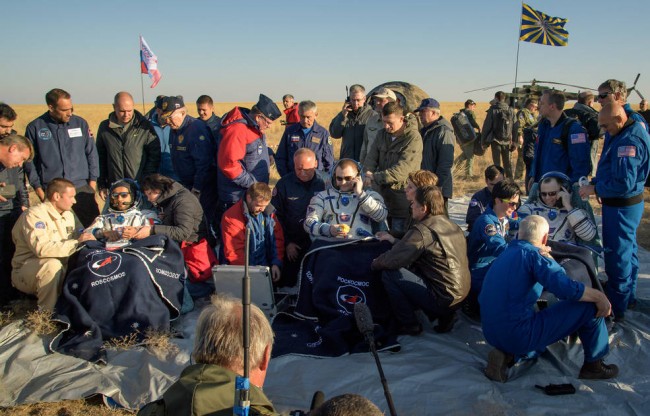 Three astronauts bravely took the plunge back to Earth from the International Space Station and have safely landed in Kazakhstan. A Russian commander, his co-pilot, and an astronaut from the United Arab Emirates who flew for the first time have made it home after what can be considered a successful mission in space.

While the recovery crew was waiting to help them out of the cramped up Soyuz descent module, all three of them appeared healthy and happy that they are finally back home. As they began to adjust to the familiar pull of gravity, they underwent initial checks to ensure that they are all healthy.

It was an amazing trip that began at exactly 3:37 a.m. ET when the spacecraft Soyuz MS 12/58S undocked itself from the Russian Rassvet module.

In the central crew compartment lies Alexey Ovchinin, the vehicle commander. Nick Hague, a NASA flight engineer, and Hazaa Ali Almansoori, a "participant" in the spaceflight, were all strapped in their recliners. Both Ovchinin and Hague were trying to close a mission that lasted for 203 days. Almansoori, on the other hand, is a guest cosmonaut who only arrived at the ISS on September 25, 2019 and  was wrapping up what seemed like the shortest trip ever made in space as it lasted for only an eight-day visit.

NASA personnel, the Russian recovery team, as well as UAE officials welcomed the crew with a gift of fresh fruits and water. After their more detailed health check, Almansoori and Ovchinin expressed their plan to head to Moscow while Hague decided to board the NASA jet for a long flight to Houston and back at the Johnson Space Center.

There are still six astronauts who were all part of the expedition 61 crew left in the ISS. They are to be challenged by a busy schedule filled with  a dozen or so spacewalks, all planned to be done by the end of this year. Five of which is to be spent to install fresh batteries at the solar power station of the ISS. Another five to six will be spent repairing a particle physics experiment worth $2 billion. And the last one will be used to carry out maintenance repair on the Russian laboratory complex.

Koch and Morgan have been assigned on the first battery swap to be done on Sunday.

The station crew left behind may welcome commercial crew ships—SpaceX and Boeing, both are in their final stages of preparations for the launch. NASA has been solely relying on the Russian Soyuz to take astronauts into space to and from the ISS. The agency is counting on these two to provide an alternative.

However, the two companies are still working out major problems and are not sure when they would be ready for the trip. NASA managers are working on purchasing additional seats in the Russian Soyuz to ensure an uninterrupted presence of US astronauts in the ISS.

According to Ovchinin and Hague, the safe return to Earth has closed out an exciting year of discovery in the ISS. Everything all started in their first attempt to reach the station in October of 2018. Two minutes after the dramatic launch, the Soyuz booster broke apart, which then led to an emergency abort. The launch was resumed two months after repairs have been made. In March of this year, both Ovchinin and Hague, joined by Koch, were launched into space.

"This has been an exciting year," Hague said. During an interview, he said that his space mission made him realize that he is part of something that is larger than him. He also added that the trip made him feel that he was a steward of the planet. "The change in perspective has made everything profound."