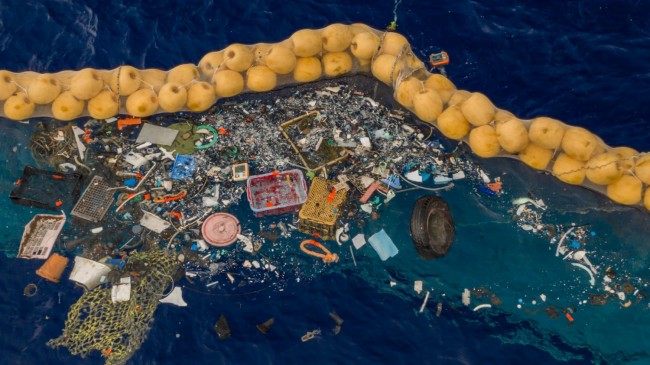 Did you know the world produces enough plastic each year to build 50 Pyramids of Giza? That's over 350 million tons of chocolate wrappers, PET bottles, synthetic fabric, and fishing nets that wind up in our oceans and landfills, according to Tech Insider. Most of it find its way into massive garbage patches around the world—large areas of sea that collect litter, debris, and wasted fishing gear—the biggest of them all being the Great Pacific Garbage Patch.

Located in the North Pacific Ocean, the Great Pacific Garbage Patch is a 1.6 million square kilometer area collecting marine debris and contains an estimate of 1.8 trillion individual pieces. This is ten times more plastic than the stars in the Milky Way galaxy.

Half of the plastic waste found in the patch are lines, ropes, and fishing nets that come from intensive fishing near the area. The other half consist mostly of hard plastics like PET bottles and wrappers. According to estimates, the plastic are scattered over a region of ocean that's twice the size of Texas.

Researchers have found ingested microplastics in every species of sea turtle and nearly 60% of whale species and sea birds. More plastic is pouring into the world oceans each day. Experts estimate that the amount of plastic in the oceans will outweigh all the world's fish by the year 2050.

Last year, scientists declared that there will be no end to the plastic epidemic that is plaguing our seas, since the garbage patch is constantly ebbing and flowing with the ocean currents. However, in 2013, a Dutch nonprofit organization decided to challenge this declaration through a self-contained System 001/B prototype barrier.

The Ocean Cleanup is an organization that has been working on developing advanced technologies to battle ocean plastic pollution. And after years of developing and revising their plastic barrier for the Great Pacific Garbage Patch, the cleanup has finally begun.

As of Oct. 2, System 001/B, a massive floating device that was designed to concentrate the plastic in the patch and effectively remove it from the ocean, has started to collect plastics from the Pacific Garbage Patch. It collects all kinds of plastic, from fishing gear to hard plastics, and even microplastics. The device is fitted with transmitters and sensors to be able to communicate its position via satellites to the vessels that will collect the gathered waste every few months.

Boyan Slat, founder of the Ocean Cleanup, was proud to announce the project's first success. "After beginning this journey seven years ago, this first year of testing in the unforgivable environment of the high seas strongly indicates that our vision is attainable and that the beginning of our mission to rid the ocean of plastic garbage, which has accumulated for decades, is within our sights."

The nonprofit organization was established in 2012, and it has been striving to clean up the world's oceans ever since. The organization aims to develop more technologies that will speed up the process of ocean waste management and sanitation.