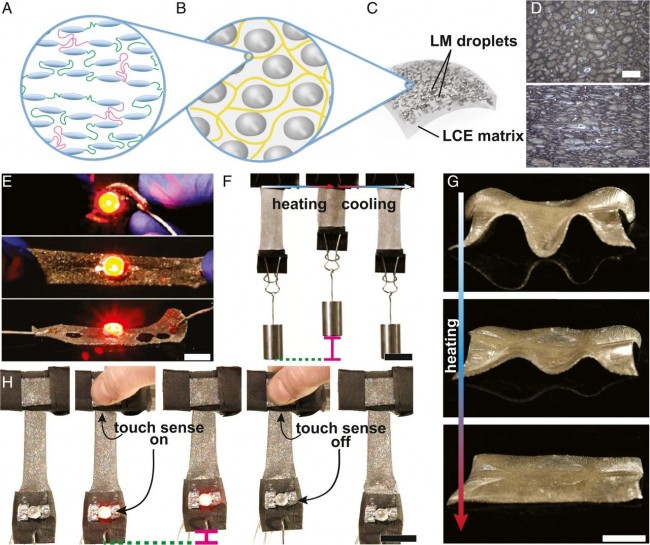 (Photo : Proceedings of the National Academy of Sciences of the United States of America)

A new field of robotics called "soft robotics" is emerging to deal with the challenges faced by conventional robotics. Instead of rigid metals, soft robotics employ materials that are designed to deform slightly to deal with complex applications requiring a delicate touch, such as picking fruit without bruising or handling internal organs in surgery.

A promising candidate for the field is a class of materials called liquid crystal elastomers (LCEs) which provide good actuation properties (the ability to contract, expand, and move). However, they lack the capacity to effectively conduct electricity and heat, limiting the material's ability to "remember" its original shape through electrical signals.

As such, research is currently being done to increase their conductivity so that LCEs can see greater use in artificial muscles, wearable technology, and other types of soft robotics. Published recently in the Proceedings of the National Academy of Sciences, a new study by researchers from Carnegie Mellon University and the University of Texas at Dallas has incorporated liquid metal microparticles of gallium and indium into LCEs to enhance their electrical and thermal conductivity. The result is called a liquid metal–liquid crystal elastomer composite (LM–LCE), a versatile material that exhibits several remarkable qualities and functions.

LM–LCE synthesis is quite simple: a liquid metal alloy of gallium and indium was mixed into an LCE mixture, which was then left to cure before being placed in an oven. The result is nothing less than outstanding, providing a versatile material that exhibits several remarkable qualities and functions.

Conventionally, conductive microparticles are added to LCEs to make them conductive. The problem is that these tend to inhibit the LCE's movement and deformation. Using a simple and ingenious workaround, the researchers replaced these solid microparticles with liquid microparticles made from gallium and indium. Because gallium and indium are liquids at room temperature (hence the name liquid metals), they can deform freely with the soft LCE instead of inhibiting it. The result is a more conductive LCE that still retains much of its actuation properties.

When undergoing Joule heating, where current is passed through material to produce heat, the LM–LCE was shown to be able to stretch and return to its original position with the application of current. By programming a "rest state" for the LM–LCE, it's possible for it to self-heal when exposed to the right amount of electricity. The researchers even made a simple crawling robot from the material by alternating the amount of current they put in. Amazingly, the material also exhibits similar properties to mammalian skeletal muscle (maximum work density, to be exact).

Aside from this, LM–LCE also exhibits the ability to detect and adapt to damage. Mechanical damage, such as holes or tears, may cause electrical shorts around electrical components. To avoid this, the LM–LCE can sense damage in these areas and reroute current accordingly.

With great versatility, the LM–LCE composites have a very wide range of applications not just in the soft robotics industry but in the electronics industry as a whole. With materials innovation making leaps and bounds, we can expect electronics development to proceed at a much quicker pace.