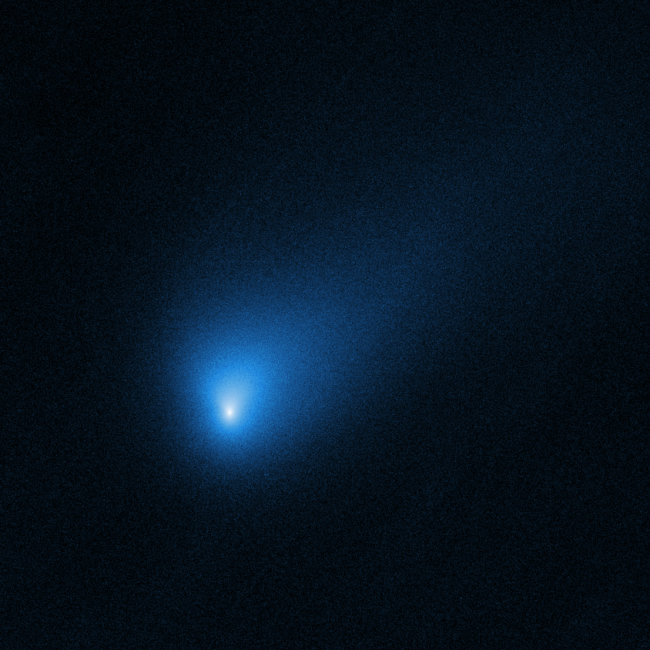 A visitor from an alien solar system is making its way to our solar system, though it's not what you might expect.

Amateur astronomer Gennady Borisov discovered the interstellar comet, now named 2I/Borisov, on Aug. 30, at the MARGO Observatory in Crimea. This is the second-ever recorded interstellar visitor to have passed our solar system, following Oumuamua in 2017. Subsequent observations from the International Astronomical Union's Minor Planet Center and NASA's Center for Near Earth Object Studies both confirmed its interstellar origins.

The sharpest image of 2I/Borisov to date, the picture was captured by NASA's Hubble Telescope on Oct. 12, while it was cruising along at around 180,000 kilometers per hour. This image reveals in much better detail the central concentration of dust around the comet (although not the comet itself), which was originally captured by the William Herschel Telescope in La Palma, Spain, and the Gemini North Telescope on Mauna Kea, Hawaii earlier this month. The dust cloud, called the coma, is a result of ice and other matter melting off and forming gases upon approaching the Sun. This phenomenon is also responsible for the tail of the comet, formed from ionized gases.

While Oumuamua was found to have a rocky composition like an asteroid, 2I/Borisov's icy chemical makeup is like more conventional comets we find in our solar system. Along with its composition, it also has a similar color and size to our comets.

Most comets we have thus observed come from a region of space called the Kuiper Belt, a doughnut-shaped collection of icy debris just beyond Neptune, which was created as a result of the solar system's creation. Other comets we have observed are thought to come from the theoretical Oort Cloud, a spherical shell of icy debris that surrounds our solar system. Based on its trajectory, researchers traced 2I/Borisov's possible origin from double star Kruger 60.

The discovery of 2I/Borisov gives us a lot of insight into the worlds outside our solar system. Its similarities to our native comets are remarkable and give us a clue to what star systems outside our own might be composed of. By continuing to observe its chemical composition, structure, and other key characteristics, we can have a much better glimpse of alien star systems and how they were possibly formed.

NASA's Hubble Telescope observing team plans to conduct more observations by January 2020 and more in the pipeline being proposed. Max Mutchler, one of the team members, shares in Hubble's press release:

"New comets are always unpredictable...They sometimes brighten suddenly or even begin to fragment as they are exposed to the intense heat of the Sun for the first time. Hubble is poised to monitor whatever happens next with its superior sensitivity and resolution."

Following a hyperbolic orbit, the new interstellar comet is set to reach its closest distance to the Sun by around Dec. 7. Astronomers predict that it will be past Jupiter and back into interstellar space by mid-2020. Until then, scientists have a rare opportunity to observe an alien comet.