Full-Speed Ahead: NASA Aims for Manned Mars Mission by 2035 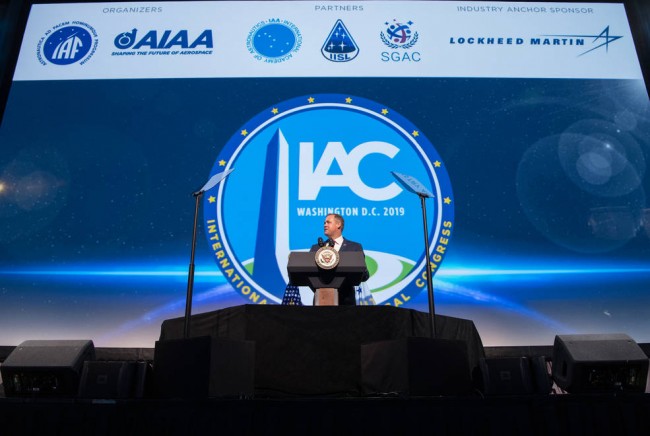 Several representatives of the world's leading space agencies are gathered at the 70th International Astronautical Congress (IAC) currently ongoing in Washington. During one of the panel discussions, NASA Administrator Jim Bridenstine shares NASA's intent to reach Mars within the next few decades:

Despite the Science & Technology Policy Institute's recent report concluding that a manned Mars mission isn't feasible until at least the late 2030s, NASA continues full-speed ahead thanks to an increased budget from the Trump administration.

Several space agencies have an increasing interest in the Red Planet. Aside from the ExoMars Rover of the European Space Agency, the United Arab Emirates Space Agency is also looking to launch its own Hope Spacecraft, as well as Japan's Martian Moons Exploration program considering launching their own spacecraft as well, all within the next few years.

From Moon to Mars

NASA has accelerated the timeline of their Moon landings, with the Artemis program's manned lunar missions planned for 2024, acting as a stepping stone for future missions to Mars. The lessons learned from the Artemis program would be invaluable for the success of Mars missions.

The development of the Gateway is a critical component for future missions to Mars. Envisioned as a space station orbiting around the Moon, it will serve as a staging ground for astronauts to conduct missions on the lunar surface and is going to be equipped with several robotics and science systems to support these missions. The creation of the Gateway is instrumental to further human exploration of our solar system and is estimated to be completed by 2026.

Sending manned missions to Mars is going to be a huge challenge. Aside from the technological barriers, several other issues need to be addressed if NASA is to achieve its goal in the timeframe set. That's why NASA has taken extensive efforts to partner with other space agencies to reach this ambitious goal.

The Japan Aerospace Exploration Agency (JAXA) is looking at possibly partnering with NASA. This partnership seems to work together on joint manned lunar excursions, assisting Gateway missions, as well as working on the robotics of a Smart Lander for Investigating Moon.

The Canadian Space Agency (CSA) is also working closely with NASA, committing to providing a robotic arm dubbed 'Canadarm3' to help assist with repair and maintenance of the Gateway space station. With 1.56 billion USD to the project for the next 24 years pledged, Canada's support is a welcome addition to getting the Gateway operational on schedule.

The European Space Agency (ESA) may soon very well join in too. ESA president Johann-Dietrich Wörner and NASA's Bridenstine are looking into the Gateway program during this year's Space19+ meeting set for November, as said during one of the IAC panels.

With more and more support being drummed up, reaching another historic milestone in space exploration is looking to be inevitable. Whether this can be done by 2035 remains to be seen.