New Solar Panel Design Inspiration: How Do Sunflowers Get the Most Out of the Sun’s Bright Light? 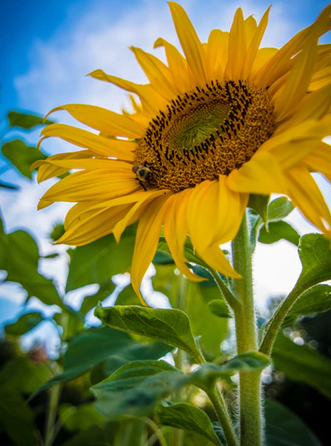 Just like people, sunflowers follow their circadian rhythm. And while for us, this concept helps us go through our daily routine, for sunflowers, this helps them develop. The lovely flowers use their circadian clock and follow the sun throughout the daytime in order to stimulate growth hormones.

In a recent report published in Nature Nanotechnology, scientists from UCLA make use of this information to create an artificial material that mimics the circadian rhythm of the sunflower. Although some substances are capable of moving towards the direction of light, these existing materials tend to stop arbitrarily. This gives the sunflower-like biomimetic omnidirectional tracker, or SunBOT as the researchers call it, an advantage point. SunBOTs regulate their own movements so that they face the sun at an optimal position that allows them to absorb light from the sun efficiently.

The SunBOT and Its Anatomy

Each SunBOT is made up of a polymer, shaped like a stem with a diameter of one millimeter that's about 25 times smaller than an inch. The researchers first use gold nanoparticles and a hydrogel to create the SunBOTs. Still, after a series of tests, they later they found that using carbon black nanoparticles and liquid crystalline polymers allowed them to mix and match the raw materials for certain applications. For example, hydrogel-based SunBOTs work well in water.

"If we have this big repertoire of materials working with the same principle, scientists can use it in different environments for different applications," states UC-Berkeley bioengineer Seung-Wuk Lee, who was not involved in the study.

As a result of their experiments, one of the researchers and UCLA materials scientist, Ximin He, tested how the artificial stems would perform in response to the movement of a beam of light.

They found that the side of the stem receiving light heated up and contracted. The top part of the stem then bent towards the light, while the bottom-shaded-part of the stem cooled, which allowed the top part to orient itself at an angle, where it can best absorb light from the source.

The SunBOT and Its Potential

Current solar panels are installed with solar cells that are fixed in one position. So with the sun being around all day, these solar panels absorb about 24% of its available energy. Now, as the researchers claim, the SunBOTs are able to absorb up to 90% of sunlight even under oblique incidence, over a wide operation window of angles. Lee comments on this as a "major thing that the researchers have achieved" as the study could allow absorption of solar energy that is near the maximum.

Aside from optimization of the performance of solar panels, the researchers are also looking into incorporating their development in desalination systems, in the improvement of robot mobility, a lot more applications.