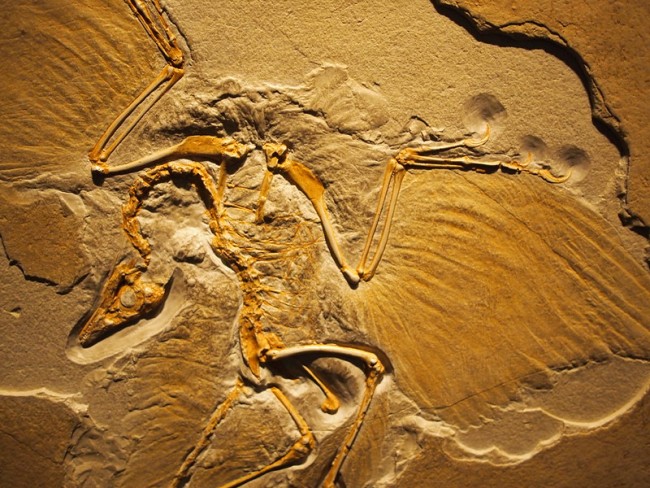 (Photo : Photo by denn on Foter.com / CC BY-SA) Shown above is the unearthed fossil of the Archaeopteryx, known as the oldest bird. Recently, another basal bird is unearthed in Japan with characteristics making it somewhat the bridge from the Archaeopteryx to the modern birds.

The origin of birds is always an exciting topic for paleontologists, ornithologists, or simply those who are into birds. Recent studies show that they are the direct descendants of avian dinosaurs like T.rex, and researchers would often analyze where the split between modern birds and their reptilian ancestors happened.

The very first known 'bird' is the Archaeopteryx: winged and long-tailed, and very much feathered. It is known as the oldest bird living between 160 million to 140 million years ago during the Jurassic period. This species of dinosaur is also able to fly, making it an important species for the understanding of the origin of birds.

It is not until recently that paleontologists in Japan found the fossilized remains of a 120-million-year-old flying dinosaur that could be the predecessor to the Archaeopteryx.

Although the Archaeopteryx is widely accepted as the earliest bird species, its characteristics are still far from that of modern birds. As a matter of fact, the characteristics that are commonly associated with modern birds did not appear until the Cretaceous period, with fossils found in northeastern China. The fossils found were two-dimensional. However, it was clear that these avian ancestors do not possess a pygostyle or the bone found at the end of the vertebral column that supports tail feathers.

The newly found fossilized specimen was uncovered by Takuya Imai and his team from the Institute of Dinosaur Research at Fukui Prefectural University in Fukui, central Japan. The researchers were lucky to find a three-dimensional, preserved pigeon-sized bird skeleton, which can largely help in understanding the evolution of birds. Because of the findings, the newly discovered fossil has become the second-most primitive flying dinosaur in the evolutionary record. Imai and his team named it Fukuipteryx prima, introducing a new genus and a new species.

This new species of basal bird lived 120 million years ago, and the study revealed that the Fukuipteryx was among the earliest birds with pygostyle capable of limited flight. The fossil was unearthed in the Kitadani Dinosaur Quarry near Katsuyama city. This fossil is of utmost importance because this is the very first ancient bird species from the Cretaceous period to be found outside of northeastern China.

The three-dimensional preservation of the fossil is indeed rare. The Fukuipteryx species that was unearthed was about the size of an adult pigeon. What was surprising, however, is that the fossil was found along with relatively young sediment and was surrounded by fossils of more evolutionary advanced species. In an e-mail with Gizmodo, Imai explains, "we were so surprised that we did the whole analysis again as we thought we did something wrong. But no matter how many times we checked, our data and methods did not change."

What Imai and his colleagues did was to remove the specimen carefully and did a comparative analysis between the newly found Fukuipteryx and other fossil birds. Since they cannot remove the bones from the rock, they scanned the specimen using a micro-CT scan technique. The physical analysis showed some similarities with the Archaeopteryx, such as the large wishbone, pelvic bones that are unfused, and forelimbs. Unlike the Archaeopteryx, Fukuipteryx has a fully formed pygostyle.

However, Imai and his fellow researchers do not believe that the presence of the pygostyle indicates complex flight capabilities--rather, the pygostyle is a byproduct of evolving shorter tails over time. The Fukuipteryx can fly, yes, but not as proficient as modern birds. The study about the Fukuipteryx is published in Nature.