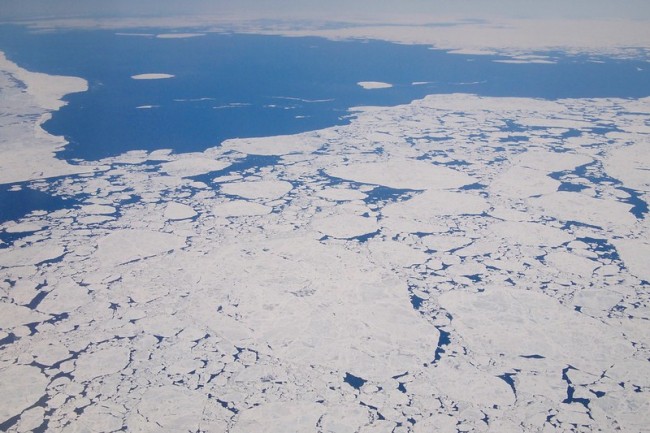 Climate change has once again made its impact on the world's landscape and this time it was slowly able to open the historical Northwest Passage, a maritime trade route that passes from Europe to Asia through the Arctic Ocean.

Researchers from the University of California Riverside discovered a way to navigate through the Northwest Passage, avoiding the motion of floating ice. Lead author Monica Martinez Wilhelmus, assistant professor of mechanical engineering at the Marlan and Rosemary Bourns College of Engineering and her team used MODIS -- or moderate resolution imaging spectroradiometer -- to be able to understand long-term ocean movements based from sea ice dynamics.

These MODIS sensors are located aboard NASA satellites and are used to collect daily images of large, flat sheets of floating ice -- which are collectively known as floes -- from all over the arctic for over 20 years. However, it used to be an arduous task for scientists to use MODIS to track how floes move with ocean currents because images are often blocked by clouds, which will then force them to mark and identify located floes manually.

In the study done by Martinez and her team, they used image-processing algorithms for them to remove clouds that are obstructing their view, sharpen the images, and separate individual floes. With the help of image analysis algorithms, they are able to monitor and map the movement of floes for days finally.

It is amazing to note the current ocean maps made with the help of MODIS were as accurate as of the maps that were made traditionally. With these maps, it will be easier for scientists to understand the sources behind sea-ice transport. In a press release issued by the University of California Riverside, Martinez explains, "No one had bothered before to use MODIS because the satellite is sensitive to clouds and it's hard to identify ice. Our algorithm automatically filters clouds and uses other image processing algorithms that give the velocity and trajectory of the ice floes."

The results of the analysis will finally be able to help researchers quantify how much the interactions between currents, climate, and sea ice changed throughout the last two decades. Rosalinda Lopez, a graduate student at Martinez's lab and the first author of the study, explains, "MODIS data is one of the longest records of Earth ever compiled. This means that we can expand our analysis to almost two decades to observe the variability of sea ice as dramatic changes transform the region."

The quick thawing of the ice melt affects how much freshwater that comes from the ice blends into the saltwater. This , in turn, will affect how the ocean current moves. Martinez explains that since the addition of freshwater to seawater affects the flow of the current, scientists need to understand how ice interacts with the ocean. It is of dire importance, especially nowadays, when the Arctic is melting at a rapid rate, to learn how ocean currents change. These altered currents will eventually affect Arctic communities that solely depend on hunting and fishing.