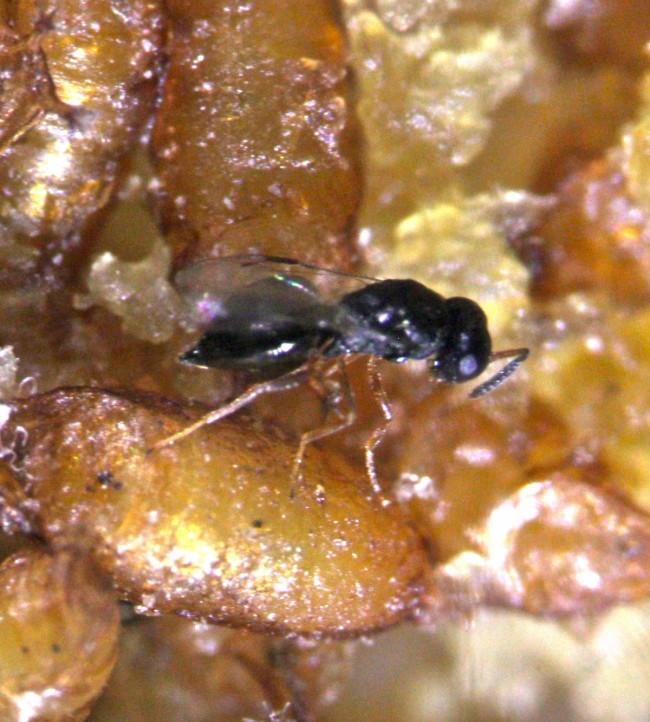 (Photo : Oregon State University Press Release) Pachycrepoideus vindemniae is the only known parasitoid that is actively eating and killing the invasive spotted-wing drosophila

Insects, in general, are mostly views as pests. However, these arthropods are beneficial to the environment by being the agents of pollination and help plants reproduce (READ: Pollinators: What's All the Buzz About?). Insects can also be maximized as a biological control against invasive pests like the spotted wing drosophila.

Entomologists from the Oregon State University observed a parasitic wasp that was able to show great potential in attacking and controlling the spotted-wing drosophila.

WHAT EXACTLY IS BIOLOGICAL CONTROL?

Biological control, or BioCon, is basically the use of beneficial insects or plants to ward off harmful insects. This the natural alternative to pesticides. Biological control is not a new practice. Rather it is something rediscovered due to the harmful effects of pesticides not only to the plant but to the soil as well, which has long-lasting effects. There are a lot of advantages in using biological control: first, minimizing safety concerns. Pesticides usually pose a health risk when the affected plant is ingested. In biological control, there will be no fear of pesticide residues that will neither be ingested nor retained in the environment. Another advantage of biological controls is that it is less costly than chemical fertilizers.

In the case of the spotted-wing drosophila, pesticides are applied twice than the normal amount of dosage because of the insect's ability to reproduce continuously. According to Vaughn Walton, an entomologist at Oregon State University's College of Agricultural Sciences, spotted-wing drosophila can be quite difficult to control and that requires twice as much pesticide.

The big dosages of pesticides used to get rid of the invasive spotted-wing drosophila are not economically or environmentally sustainable. Yet, the damage that the fruit fly can do is horrendous. For instance, the invasive spotted-wing drosophila can destroy at least 10% of fruit value in berries (blueberries, blackberries, strawberries, and raspberries) and grapes. This proves to be a problem for the wine industry in Europe and the United States.

READ: Intelligent Bumblebee is the First Insect to Learn Skills from One Another

HOW DID THE INVASIVE SPOTTED-WING DROSOPHILA ARRIVE IN THE UNITED STATES?

HOW CAN THE INFESTATION FROM THE INVASIVE SPOTTED-WING DROSOPHILA BE STOPPED?

Walton and his colleagues introduced a solution to the problem of the invasive spotted-wing drosophila: a tiny wasp belonging to the family Hymenoptera named Pachycrepoideus vindemniae (READ: Bumble Bees News: Endangered Species, One Of The Most Important Insect On Earth). In a press release issued by the Oregon State University, Walton explained, "based on the survival and host-killing capacity of the wasp, we have concluded that it has tremendous biocontrol potential against the spotted-wing drosophila."

In their journal that has been published in PLOS One, the entomologists described how P.vindemniae avoids the antibodies produced by the host when they feed into them: they lay their eggs on the outside of the lava skin. That way, the invasive spotted-wing drosophila larvae's body will not be alarmed and send out antibodies to combat the parasite. Walton explained that this what makes P.vindemniae effective as a biological control agent against the invasive spotted-wing drosophila.

P. vindemniae underwent meticulous observations, and the entomologists are just waiting for a permit to raise the wasp and release them in infected areas.

Can Startup Labs Excel in the DNA Testing Market?