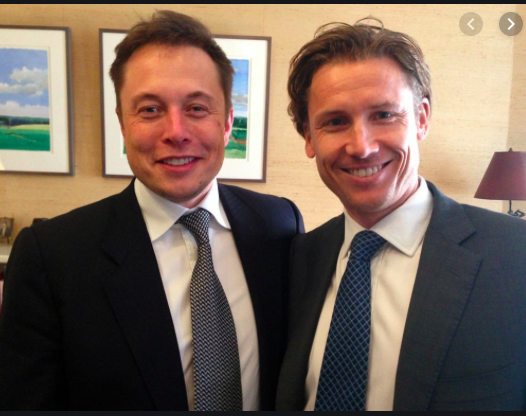 (Photo : Photo: Christian Eidem and Elon Musk - during the filming in the Ambassador's office.)

Elon Musk is famous for dismissing most academic papers: "...most papers are pretty useless. I mean how many PhD papers are actually used by someone ever."

So when he claimed that he had written a paper while still a student at Wharton Business School that described a search engine that was a lot like google, the internet went crazy trying to find it. He made the claim in a short video that surfaced on YouTube in August 2017, but was filmed some years earlier in the office of the US Ambassador to Norway. In the video, Musk, turns to someone off camera and says: "Hey, you still have a copy, don't you?" The person replies, "Yes".

The person off camera was Christian Eidem the co-author with Elon Musk of the paper, called International Research and Development Corporation: "My mother kept a copy in the attic. I do not think it would be fair to publish the whole thing but there are some very interesting quotes that show how far ahead our young thinking was. Overall, the paper stands up well. Maybe one day it will be published in Elon's complete works."

The paper outlines a system designed to share academic research and papers to reduce the time and cost of R&D. This is, as Eidem admits, ironic given Musk's expressed views on the value of academic research papers. One of the main purposes of the company would be to ensure that: "Discoveries made in federally-funded laboratories, universities, and the private sector" which "can be pivotal to the success of new business ventures and to existing businesses" are made accessible  as continuous "flow of technological discoveries." The analysis of the need for this kind of information system was ahead of its time:

"A company not only has to continuously come up with newer and better products, but has to do so faster than its competitors. The response to this need is increasingly to outsource research and development expertise. This can range from something as simple as obtaining the answer to a question in minutes that might otherwise have taken days, through to ten year co-operative projects. The problem that exists today is the lack of any suitable forum for the exchange of knowledge, particularly on the international level."

Before Google that was indeed the limit of the internet as a tool. As Eidem says, "It was shortly before this paper was written that the telecommunications capacity for something like this came on stream. Before then email and slow exchanges of files defined much of the use of the internet". The paper outlined what would be needed to transform things:

The young students were also accurate in their views that "Companies must strive for a constant process of self-renewal and innovation to ensure their technological edge as they race through product cycles." In the end the way in which search engines would become the driving force for economic development was also spelled out for the IRD corporation:

"The research and development market is tremendously fragmented, especially on an international scale. Pockets of knowledge and specialties exist in specific regions around the world and are not being tapped or exploited. At the base of the problem is a lack of communication, or more specifically, a lack of a communication medium that integrates all such information and provides quick and easy access to the user. Without the benefit of real-time knowledge of ongoing research and expertise around the world, simply deciding who to approach for their R&D needs can be a long and difficult process."

The main technology that would have driven the search engine has the characteristics that later made Google so much better than other engines at finding what you need to know: "The core database software will be licensed from Personal Library Software (PLS). This offers state-of-the-art intelligent information retrieval, going far beyond the standard keyword and boolean logic abilities of other systems. It allows one to search by concept, heuristic constraints and associated term probability using standard English." The Business school students did not ignore the bottom line:

"One of the strongest indications of the feasibility of this projected venture is its financial structure. In a sentence, IRD promises high return on a low initial investment that carries little financial risk. The state of the on-line industry mostly explains why this opportunity has not been fully exploited yet. The industry is still in its growth stage, and there is little direct competition between providers of on-line services."

Today Google is worth around $110 billion and its parent company, Alphabet has peaked at close to a $1trillion valuation. Does Eidem thinks about what might have been: "No point. I am happy we did a good piece of work back then and as Elon says, lots of student papers are never looked at again. It was fun to work on the project and I am amazed it holds up today."