Scientists Check Out Trade Routes in Angola, A Hotspot for Illegal Wildlife Trade 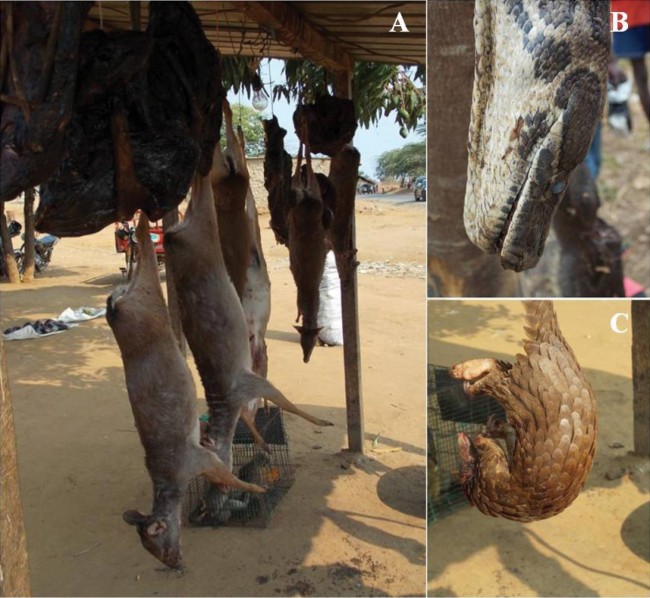 (Photo : "A rapid assessment of hunting and bushmeat trade along the roadside between five Angolan major towns" Goncalvez, et.al.) Walk along the roads of busy cities in Angola and sights like this will welcome you.

Although hunting has been a part of human civilization for time immemorial, poaching wildlife for commercial use is not and it has been a major threat in the world's biodiversity for decades. An international group of scientists led by Dr. Francisco M. P. Goncalves of the University of Hamburg in Germany traveled around Angola to assess the state of the wildlife trade in the region.

Through this expedition, the scientists were able to discover that even though there exists legislation on poaching and illegal wildlife (for bushmeat) trade, it barely makes it impact -- there is no effective enforcement of the law to deal with the situation.

Angola is one of the most biodiverse countries in the African continent and according to the study done by Dr. Goncalves and his team, is home to an estimated 6,850 species of plants, that are native and 226 are non-native. Angola is also home to 940 bird species -- endemic and non-endemic -- and 117 and 278 species of amphibians and reptiles, respectively. The country is also home to 358 species of freshwater fishes and 275 species of mammals.

The scientists state that the long-lasting civil war in the country contributes greatly to the wildlife loss and near extinction of many species. Travel along the roads of the country and there will be a variety of bushmeat being sold either fresh, smoked, or dried. Live animals are also being sold to urban dwellers who are traveling the main cities of Angola.

It seems the outbreak of diseases and the possibility of contacting of said diseases from bushmeat did not affect the trade at all. The animals are still directly supplied by hunters and are slaughtered without following a strict sanitation policy.

THE MAJOR TRADE ROUTES ARE THE HOTBED FOR BUSHMEAT TRADE

Angola's major trade routes run between the provinces of Bengo and Uige and here a wide animal variety is being sold. For instance, travel these roads and various species of antelopes, monkeys, snakes, and the critically endangered pangolin will greet visitors as trade goods. Different species of birds are sold in pet shops and the streets, at town fairs, and even in the entry points of cities. However, there is no evidence of cross-border trade but there are speculations that bushmeat trade happens in informal markets located at the principal border posts as, the scientists' note, commercial activities between countries are not regulated.

The notoriety of Chinese customers in the pangolin trade is also observed here. Since it is believed in the Chinese traditional medicine that pangolin scales have medicinal properties, it greatly contributed to the near-extinction of one of the world's most mysterious animals. According to the researchers, they were even able to witness a Chinese customer looking for pangolins when they stopped by one of the villages.

The Angolan government has tried to find solutions to end this illegal trade including setting out a list of species that are to be untouched for hunting and trade which, unfortunately, is not effective since the researchers were still able to find species that were on the list in the markets across the city. The government also banned hunting of certain species outside the hunting season and introduced compensation fees. However, the police force is not taking the necessary actions to halt the operations of the bushmeat trade. One of the reasons that can explain this lack of spine from the authorities is the lack of clear definition and responsibility arrangements in terms of prosecuting those who violate the laws of illegal trade and hunting.

The scientists encouraged the re-assessment of Angola's wildlife for the local government to produce the appropriate legislation and be able to enforce it efficiently. The results of this expedition are published in Nature Conservation.