2020 is definitely a year of new beginnings for the National Aeronautics and Space Administration as it develops new missions to better understand the universe. Aside from the much anticipated Artemis missions, NASA is going to launch Lucy: the first mission to the Trojan asteroids of Jupiter.

It is important to get to know these Trojan asteroids as they may be the remnants of the primordial material that formed the outer planets and may serve as a time capsule from the birth of our Solar System approximately more than 4 billion years ago. The Trojan asteroids are a primitive entity in our system and they orbit in two loose groups that revolve around the Sun -- the first group is always ahead of Jupiter, and the second is always behind.

Lucy is named after the fossilized Australopithecus (an ancient human species) whose skeleton was able to provide massive insights into the evolution of humanity. Like its namesake, the Lucy mission aims to revolutionize our general knowledge of the origins of the planet and the formation of our very own solar system and the origin of life itself. The Lucy mission will be launched in October of 2021 where it will trek the space for 12 years towards seven different asteroids (a Main Belt asteroid and six Trojan asteroids). The path that Lucy will take will give humanity its first close-up look of all three major types of bodies in the swarms which are called C-, P-, and D-types. The P- and D-types look awfully a lot like the asteroid found in the Kuiper Belt while the C-types are mostly found in the outer parts of the Main Belt between Mars and Jupiter.

Astronomers believe that these Trojan asteroids are rich in dark carbon compounds and may also be abundant in water and volatile substances. 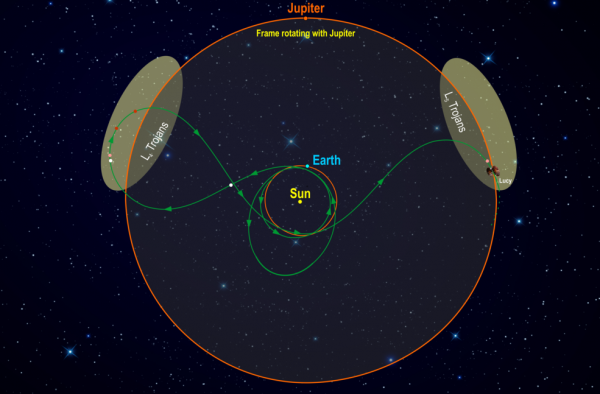 (Photo : Southwest Research Institute)
According to the press release, "This diagram illustrates Lucy's orbital path. The spacecraft’s path (green) is shown in a frame of reference where Jupiter remains stationary, giving the trajectory its pretzel-like shape."

NASA CONFIRMS THE PRESENCE OF A SATELLITE IN EURYBATES

Early into 2020 and the team behind the Lucy mission is feeling lucky as they were able to observe the asteroid Eurybates (Lucy is set to target this asteroid for a flyby mission in 2027) contains a small satellite. This discovery was made by the Wide Field Camera 3 of the Hubble Space Telescope in three instances: one in September of 2018, another one in December of 2019, and January of this year.

In a press release issued by NASA, Hal Levinson of the Southwest Research Institute and the principal investigator of the Lucy mission, the satellite that orbits Eurybates is more than 6,000 times fainter than the asteroid which means it only has a diameter of less than a kilometer. "If this estimate are correct, it will one of the smallest asteroids that are going to be visited." He said. Eurybates was first observed back in 2018 by the Hubble Space Telescope while searching for smaller satellites and a Lucy mission member pointed out the possibility of a satellite by November. According to co-discoverer Keith Noll (a Lucy project scientist from NASA's Goddard Space Flight Center), they asked Hubble for more time to confirm and fortunately, the observatory gave them three instances. Luckily, the team was able to make the first confirmation in December of 2019 and early January. "In the first two observations in December, we were not able to see anything but on the third orbit, there it was." Noll narrated. It was difficult for the astronomers to see the possible satellite especially since it orbits the much brighter Eurybates.

As of the moment, the Lucy mission team is still working with Hubble to decide when is the next best time to make observations after Eurybates becomes observable. Further observations are also not possible until June because of the Earth's and Eurybates' orbit and because the telescope can't be faced directly toward the Sun. meanwhile, the team is using the current data to be able to study the satellite's orbit around Eurybates.