Coronavirus Effects: What Happens to the Body of Infected Individuals 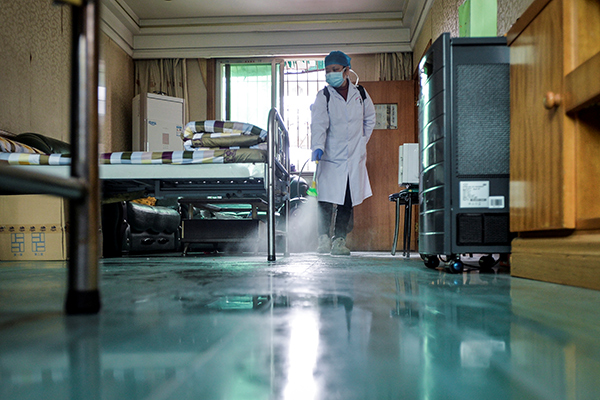 (Photo : China Daily via REUTERS ATTENTION EDITORS)
A doctor disinfects a room for medical staff with sanitizing equipment at a community health service center, which has an isolated section to receive patients with mild symptoms caused by the novel coronavirus and suspected patients of the virus, in Qingshan district of Wuhan, Hubei province, China February 10, 2020. Picture taken February 10, 2020. - THIS IMAGE WAS PROVIDED BY A THIRD PARTY. CHINA OUT.

Coronavirus or Covid-19 currently has at least 2,592 death cases in China as of February 23, the window of opportunity to stem this epidemic was "narrowing" says the World Health Organization (WHO). This new type of virus was first detected last December 2019 and has infected more than 78,000 people in more than 30 countries. The vast majority of these cases were recorded in China.

As the virus continues to spread, fear also spreads across the globe. Scientists in the frontline in Wuhan, China and researchers around the world ramped up efforts to understand its effects on the human body.

The virus has varying levels of severity like mild, severe, and critically ill. Most of the cases recorded are mild but all the patients have developed pneumonia. The Chinese Center for Disease Control reported that among the confirmed cases about 81% develop mild cases, 14% develop severe symptoms and 5% of them are critically ill.

Just like the SARS-Cov-2, Covid-19 also infects the tissues and airways deep in a person's lungs rather than the nose. The patient experiences the common symptoms such as fever, fatigue and a dry cough.

However, not all confirmed cases reported the same symptoms. For example, the scientists from Zhongnan Hospital of Wuhan University and Jinyintan Hospital from Wuhan say that 31% reports shortness of breath, 11% have muscle pain, 9% have confusion, 8% have a headache, and 5% has a sore throat.

Most of these symptoms came from the study conducted on the severe cases of the virus. Pneumonia- an inflammation to the lungs, and eventually organ failure is expected if the patient is not yet cured.

As detailed in the Lancet Medical Journal, the first two patients to die in Jinyintan Hospital were long-term smokers and that could have weakened their lungs even though they were seemingly healthy before their death.

The first patient was a 61-year old man with severe pneumonia. Despite being on the ventilator, his lungs failed and his heart stopped beating because he was already in acute respiratory distress, wherein his lungs are unable to provide enough oxygen to his body. He died just 11 days after he was admitted.

The second one is a 69-year old man, also with acute respiratory distress. He was attached to an ECMO (extracorporeal membrane oxygenation) machine or an artificial lung but this was not enough. When his blood pressure collapsed, he died of septic shock and severe pneumonia.

The oldest are most likely to die with less than 0.5% of patients aged under 50 who have died, the Chinese Center for Disease Control said.

People who have no health problems other than the virus is 0.9% likely to die. But this rises when a patient has already an existing medical condition. There is a 6% chance in people with high blood pressure, 6% in people with long-term lung problems, 7% in people with diabetes, and 11% in people with cardiovascular disease.

Keeping in mind these growing statistics, countries around the world are also doing precautionary measures and looking for ways to battle this unknown disease.