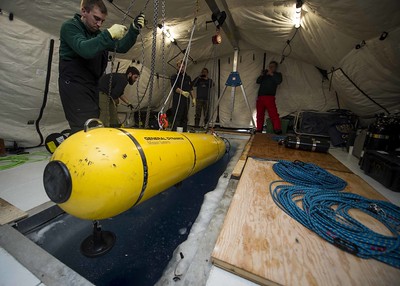 Royal Navy sealed an initial $1.3-million deal to build a 30m underwater vehicle it will use for the exploration of the possible capabilities of larger unmanned submarines in the future.

This deal is for the "extra-large uncrewed underwater vehicles (XLUUV)," designed to gauge roughly 30 meters or approximately 100 feet long, will be able to carry weapons on board.

It was awarded to MSubs Ltd., a Plymouth-based company that specializes in the building of military submersibles.

This unscrewed submarine of the Royal Navy will be three times as long as the US Navy Boeing Orca XLUUV with 10.4 meters in length.

The new submersible is set to have a range of roughly 3000 nautical miles or over 5,500 kilometers, specifying that it is implausible to function with the use of batteries alone.

Obtained through the Defence and Securities Accelerator, a partnership between Mod, industry, and academia, the Manta LXUUV was first designed an assembled in more than a year.

The Manta LXUUV can function as part of the reconnaissance, anti-submarine warfare, and surveillance operations.

In a statement, First Sea Lord's Admiral Tony Radakin said, he is tremendously excited about the potential for slightly piloted and independent systems "to increase our reach and lethality, enhance our efficiency and reduce the number of people" they have to put in danger.

It was Admiral Radakin who announced the deal at the Underwater Defence& Security Symposium in Southampton.

The official added that the XLUUVs taking the lead in terms of systems technology underwater. More so, the UK technological innovations will be the key for the Royal Navy to maintain its edge in winning the battle in the underwater environment.

The Ministry of Defence stated that the XLUUV submersibles are particularly adept at a hidden intelligent gathering. They can autonomously leave their dock and move towards the operational area without having any crew on board for three months maximum.

Possibly, the XLUUV design is based on an MSubs drone which British Navy is already currently using.

According to the ministry, autonomous submarines can detect hostile targets, as well, and report the initial findings back to the station, making them a crucial barrier for anti-submarine combat.

Jeremy Quin, UK Defence Minister said, "Submersible autonomous vessels have huge potential," and this particular deal is a potential game-changer for the underwater capability of the UK, as the ministry takes its submarine service to the next level.

This program is being executed with Defence Science and Technology Laboratory (Dstl) and Royal Navy.

According to the UK Ministry of Defence, an additional $2 million will be used as an investment for the additional evaluation of the new capability of the autonomous submersible should it succeeds in its initial testing.

At present, remotely piloted and smaller autonomous submarines are reportedly unable to embark on all tasks of larger screwed submersibles.