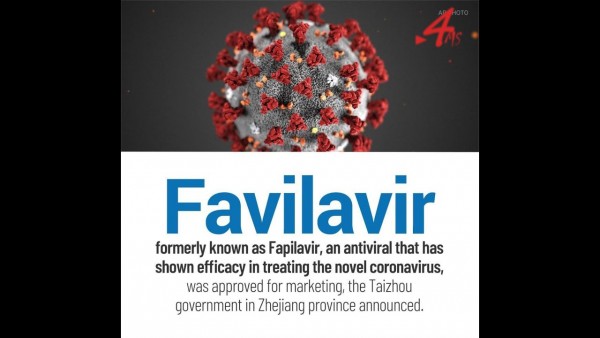 As the COVID-19 cases continue to rise globally, the National Medical Products Administration of China has approved the first-ever antiviral medicine called Favilavir. This medicine is said to possibly treat the now-declared pandemic illness.

Over the weekend, Taizhou's city government announced that Favilavir, which was initially formulated by a Chinese-owned pharmaceutical firm, is the first medicine authorized to stop the widespread of this fatal illness. At present, this drug is being promoted with the label, Avigan.

According to the Ministry of Science and Technology of China, the Favilavir of Hisun Pharmaceutical is among the three drugs that have presented results for hindering COVID-19 (in initial trials) from spreading and further damaging the health of the people worldwide.

Relatively, this drug was tested in a then, the ongoing clinical test being held in Shenzhen, Guangdong Province which engaged around 70 patients, after which it was discovered to be possibly effective in COVID-19 treatments, though some minor effects had also been recorded. At present, the generic version of Faviliavir is being mass-produced in China.

Despite the potential effectiveness and present mass production of the Favilavir, the drug has yet to be approved by the U.S. Food and Drug Administration (FDA) to be regarded as an effective treatment medicine for coronavirus. There are three facts, a recently written article indicated, which the public should know about this potential coronavirus drug.

First is that Favilavir functions as an effective antiviral drug to fight RNA infections by inhibiting the RNA-dependent RNA polymerase or the RdRp. Second is that this drug is mainly taken as an effective treatment for influenza in Japan and China. The third and last is that, presently, trials are being conducted to identify how effective Favilavir is, against COVID-19.

It was in February when regulatory officials in China first announced their approval of the antiviral "Favilavir" to be used as a treatment for the COVID-19. The approval, specifically by the National Medical Products Administration, was said to be based on the efficacy of the medicine against the infectious disease in clinical tests that began in response to the still ongoing and worsening outbreak. The medicine was formulated originally to treat "catarrhal, or inflammatory of the throat or nose."

Meanwhile, another option for an effective medicine for coronavirus called, Remdesivir, is currently being developed by Gilead, a drugmaker in the US.

This was originally intended for Ebola virus treatment. However, Remdesivir was reported to have treated an American who got hit by COVID-19, and this particular patient has now fully recovered. This drug though is still currently going through some clinical tests and has yet to be approved before being considered as an effective and official drug to treat either Ebola virus or COVID-19.

Meanwhile, South Korean doctors have also reported, they have "used the HIV combination drug lopinavir plus ritonavir" which was marketed as "Kaletra," also intended to be successful in treating COVID-19 in a patient who was 55 years old. Research groups in China have also asked former COVID-19 patients who have now fully recovered, to donate their blood plasma to be used possibly as a basis for treatment for the said virus.