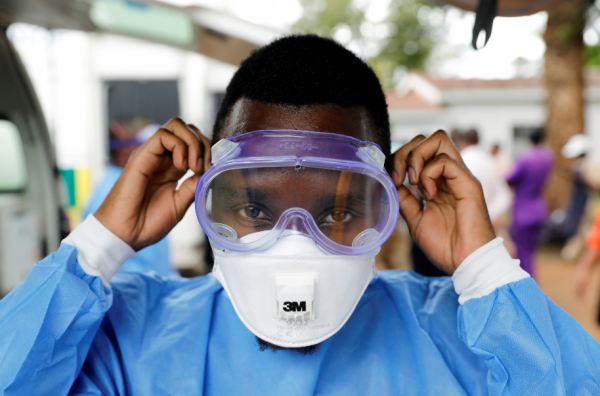 (Photo : Reuters)
FILE PHOTO: Private ambulance paramedic puts on protective gear during a training in the town of Thika

World Health Organization calls on Africa to 'wake up' as it is classified to be a "ticking time bomb," experts say. A few weeks ago, it seemed that Africa was spared from the COVID-19 health crisis, but it was never meant to last. The lag in the number of cases is just a temporary reality.

Ethiopian Tedros Adhanom Ghebreyesus, the first African head of the World Health Organization, calls for his continent to wake up and do something to avoid the increase in the number of cases they have. Scientists are greatly concerned that Africa might be staring down the barrel of disaster even though the continent has lesser casualties than other countries which have fewer than 1,000 cases.

Africa could easily become the new coronavirus epicenter with its strained medical systems and oftentimes, its lack of necessary infrastructure. Simply saying, the continent is not prepared for COVID-19.

The numbers of infected people in South Africa are relatively low compared to other countries. However, the virus has slowly begun spreading to Rwanda, Equatorial Guinea, and Namibia, bringing the number of affected countries to 23.

Experts are worried about how COVID-19 will behave in countries with weak health systems and a population disproportionately affected by other diseases such as HIV, and tuberculosis. In the continent's overcrowded cities and slums, "social distancing" is most likely hard to do.

A lack of testing in Africa is not the problem. In fact, from only two countries in the early stage of the outbreak in China, there are now 40 countries who have the ability to screen test for COVID-19. Their main focus is entry points and testing people with travel history.

However, since it does not catch people that are still in the incubation phase of up to 14 days, screening passengers for fever has shown to be largely ineffective. Additionally, it also does not detect an infection that happened in Africa.

Francine Ntoumi, a parasitologist and public health expert at Marien Ngouabi University in the Republic of Congo, strongly advised to investigate and address the reason for the non-detection of possible positive cases of COVID-19.

One way to find out whether the virus is spreading in the communities of Africa is through looking for patients presenting flu-like symptoms at clinics and hospitals. Most likely, wealthy people who can afford to travel could have the virus and possibly trickle down Africa's most vulnerable communities.

Another method is to scour surveillance systems that track flu-like illnesses for spikes. Africa CDC is now collaborating with countries to make sure that samples sent to national surveillance sites are screened for COVID-19 to help provide further clarity of the possible undetected cases.

Africa's high temperatures are believed to make the life of the virus harder which explains why it has the lowest number of cases among the other continents in the world. Although that's plausible, it is still very much an open question whether it is a seasonal disease.

The methods used by China and South Korea to combat the virus is hard to replicate in Africa because social distancing may be impossible in crowded townships, and it is not clear how African households will react to confinement.