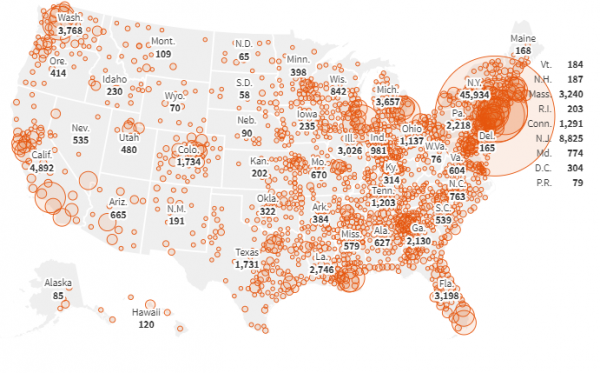 (Photo : Reuters)
At least 103,510 cases of the highly contagious novel coronavirus have been reported in the United States and its territories, according to a Reuters tally of state and local government sources. The U.S. diagnosed its first COVID-19 case in Washington state on Jan. 20. COVID-19 CASES AS OF MARCH 27, 2020, 11:35 P.M. (ET):

The United States has now more than 100,000 confirmed cases of coronavirus making it the new epicenter of the virus. The news came as President Donald Trump signed into law a whopping $2 trillion coronavirus stimulus package.

The United States now has more cases reported than China and Italy, countries that were the epicenters of the virus. America has recorded 1,693 deaths, with more than 1,000 having died this week alone. Globally, the pandemic has now reached more than 600,000 confirmed cases.

US Government's Response to COVID-19

Experts say that the lack of available testing has been a major setback for the U.S. and that has prevented the country from getting ahead of COVID-19 and its horrible effects on the people and the economy. With the recent increase in testing, confirmed cases have also gone up making the U.S. the leading country with coronavirus.

Like most of the countries worldwide, the U.S. government has asked its citizens to stay indoors and observe social distancing. The country has also banned foreign travel and has closed public facilities and businesses in major cities.

The U.S. government has set up programs for health and safety, as well as policies on travel, immigration, and transportation. They also warned people to be vigilant with scams and fraud that includes spreading fake news.

America has also set some guidelines regarding benefits and grants, housing, and voting and election. The Department of State is working with international governments in fighting the pandemic and has released travel advisories. U.S. Agency for International Development (USAID) has also provided funding to international organizations to help fight the coronavirus to stop it from further causing harm.

Just recently, Trump signed a $2 trillion bill designed to respond to the coronavirus pandemic. Under this law, the government will provide direct payments and unemployment benefits for its citizens, states will be given money and a huge bailout fund for businesses affected by the effects of the pandemic.

About 200 cities in the United States reported shortages of masks, ventilators, and other emergency equipment to respond to the coronavirus outbreak. The United States Conference of Mayors urged the federal government to provide more support after it has found out some serious shortages that underscored the "scope and severity" of the crisis.

More than 90 percent, or 192 cities, reported that they don't have enough supply for front liners such as police officers, firefighters, and emergency workers. Additionally, these cities also reported a shortage of test kits and an insufficient supply of ventilators in local health facilities.

Two-thirds of the cities said that they were not given any emergency equipment by their state, and those who did, about 85 percent said that it was not enough to meet their needs. The conference of mayors concluded that they need 28.5 million face masks, 24.4 million items of personal protective equipment, 7.9 million test kits, and 139,000 ventilators.