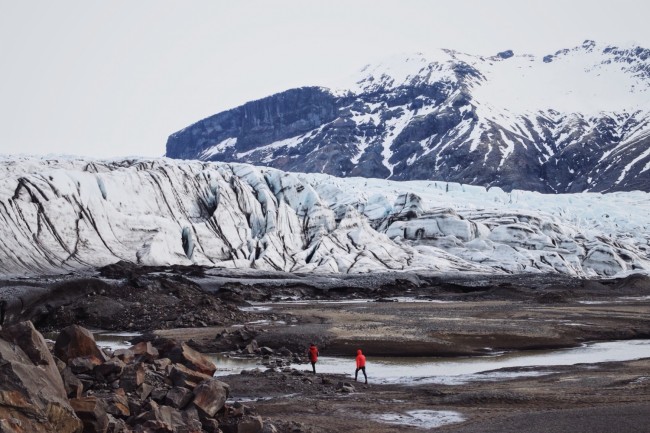 The discovery of a forgotten mountain pass at Lendbreen, Norway, revealed evidence of a heavily traveled path that was used during the Viking Age. In the passage, a myriad of artifacts and preserved items were found hidden on top of a melting glacier.

The uncovering of the passage that was believed to be used during the Iron Age through to the European medieval period, was ironically made possible by global warming.

Situated on Lomessen Ridge, artifacts such as horse snowshoes, pieces of sleds, mittens, and even the remains of a dog attached to its collar and leash, scattered along the path discovered by archeologists.

Experts used radiocarbon dating in determining when the artifacts were used in time. In the process, the amount of carbon-14 present in a sample is measured and compared against an internationally used reference standard. Through radiocarbon dating, the archeologists were able to determine the importance of the passageway to both local and external communities.

The artifacts found were believed to be either accidentally dropped or purposely left behind by the people at the time, as they made their way through the mountain. The items discovered, seemingly trapped in a glacier, maintained a record that stretches to 1,200 years. Fieldwork continues in the passageway discovered in 2011, as the glacier continues to shrink and expose more relics.

The first evidence of the use of the mountain pass dates back to 300 CE during the Roman Iron Age when local settlements were just beginning. Traffic along the path culminated around 1000 CE during the Viking Age. This age was considered to be a time of heightened mobility, increased trade, political centralization, and greater urbanism in northern Europe.

Around 1500 CE, however, the passageway was deserted and eventually forgotten. Multiple factors were alleged as possible reasons for this. Possible causes include climate change, economic shifts, and medieval pandemics, particularly the Black Death, which affected Europe from 1347 to 1351.

The new research claims that not only was the mountain pass used by local people to travel back and forth from their summer homes, but it was also used by far-flung travelers and traders. The path measures about 2,300 feet long, reaching a maximum height of 16,300 feet along the Lomseggen Ridge at Lendbreen.

Lars Pilø, the study author and co-director of the Glacier Archaeology Program, said that the findings suggest a rich history of the local farming community of which there are otherwise only insufficient sources.

Pilø says that global warming is the cause of mountain ice melting worldwide. The findings of their study are the result of this, he adds. "Trying to save the remains of a melting world is a very exciting job-the finds are just an archaeologist's dream," he says. Later on, he adds that with this, his job also comes with a sense of misgiving.

Because of global warming, we are to expect hotter days, rising sea levels, frequent and intense weather episodes, and the warming and acidifying of oceans. Researchers had warned that in 2017, rising sea levels could threaten about 32,000 historic archaeological sites in North America.

Read Also: Neanderthal Skeleton May Shed Light to How Cavemen Feel About the Dead