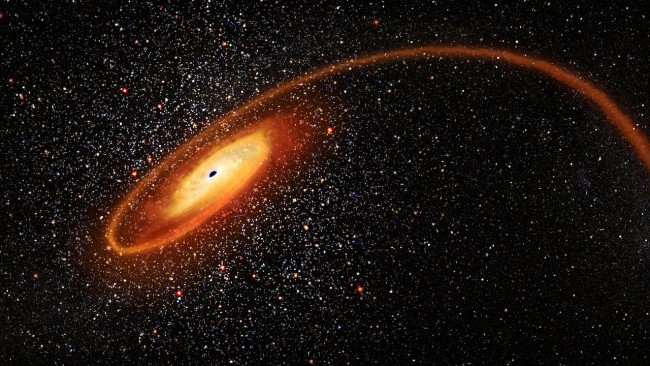 Astronomers observed the star, S2's, orbit around the black hole, Sagittarius A, for 27 years. The star orbits the black hole once every 16 years at three percent of the speed of light.

What fascinated them most was its orbit that formed a rosette shape, bashing out from the elliptical orbits at random points. This finding captivated astronomers as it once again proves Albert Einstein's theory of relativity right, as he initially predicted over a century ago, in 1915.

According to Reinhard Genzel, a director at the Max Planck Institute for Extraterrestrial Physics, the first proof of Einstein's theory was derived from the orbit of Mercury around the Sun. The planet also displays a rosette-shaped orbit due to the effect of the gravity of stars.

He added that the observational breakthrough builds up evidence that Sagittarius A must indeed be a supermassive black hole, which is four million times bigger than the Sun.

Astrophysicists from the Max Planck Institute in Germany used a range of telescopes in the discovery, including the European Space Observatory's Very Large Telescope, located in the Atacama Desert in Chile.

Also Read: NASA to Perform Checkpoint Rehearsal as OSIRIS-Rex Spacecraft will Touch Base at Bennu for Asteroid Sampling

More about S2 and Sagittarius A

S2, also called S0-2, is a star found close to the radio source, Sagittarius A. The European Southern Observatory, estimates its mass to be 14 times the mass of the Sun.

The change in its probable position has been monitored since 1995 by groups at UCLA and the Max Planck Institute for Extraterrestrial Physics. The careful watch is part of an effort to gather evidence for the existence of a supermassive black hole in the center of the Milky Way.

Studies have findings that build up to pointing to Sagittarius A being the site of such a black hole. The said source is located near the border of the constellations Sagittarius and Scorpius about 5.6 degrees south of the ecliptic. Despite the serious effort, astronomers have not been able to accurately observe Sagittarius A in the optical spectrum due to the effect of 25 magnitudes od extinction formed by gas and dust between the source and Earth.

As S2 orbits Sagittarius A, the star follows an ellipse, but the point of its nearest approach to the black hole does not always fall at the same place. Instead, it slowly moves around the supermassive object, creating a rose-shaped pattern from each blip when it interacts with the black hole. This process has been dubbed as the Schwarzschild precession.

The astrophysicists believe their findings could help uncover the mysteries of supermassive black holes, which are thought to be at the heart of every galaxy.

It was in 1905 when Albert Einstein published the first part of his theory about special relativity in the German physics journal Annalen der Physik. The physicist went on and completed his theory of general relativity only after another decade of hard work.

His theory on special relativity is based on two key concepts. First, he states that as long as an object is moving in a straight line at a constant speed with no acceleration, the laws of physics remain the same. Second, he declared the speed of light to always be constant at 186,000 miles per second.

His theory on general relativity is basically about gravity. The main thought in his theory is the idea that instead of being an invisible force that attracts objects to one another, gravity is a curving or warping of space. He suggested that the more massive an object is, the more it warps the space around it.

It is pretty interesting that after all these years, the brilliant Albert Einstein still proves to be correct with his arguments. It is without a doubt that his name will again echo and will continue to be made known to today's children for the years to come.

Read Also: Gigantic Exoplanet Might be the Exposed Core of a Giant Gas Planet