In Sync: Dog and Horse Share a Common Language During Play 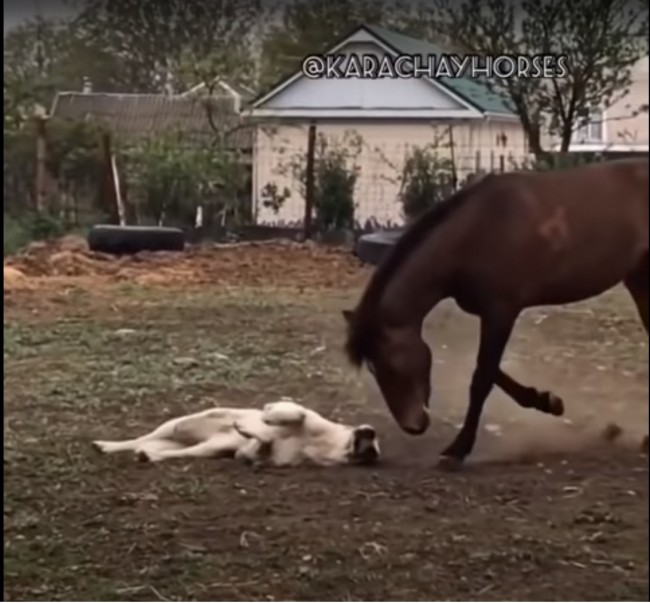 Scientists have discovered that dogs and horses could play together thanks to animal behavior that originally occurred between the same species.

According to National Geographic, Rapid Facial Mimicry (RFM) is an animal behavior that "occurs in primates, domestic dogs, meerkats, and sun bears, but has never been documented between play partners of different species."

Humans interpret this play behavior as smiles, which surprised scientists like Sue McDonnell, an animal behaviorist from the University of Pennsylvania. Although she was not part of the study, she told National Geographic that "it's a wonderful study, and takes the questions surrounding play behavior to a new level."

A behavior thought to exist only between the same species

But a scientist who was involved in the study didn't know that RFM was in play.

The study started when her student sent her a YouTube video, which showed a dog and horse playing with each other. "I realized they were in sync," Palagi said.

Palagi then asked her students to look for other videos with the following criteria: "the animals had no interference from people, were free to move, and were engaged in a play session lasting at least 30 seconds." They searched, analyzed, and selected the videos, narrowing them down to 20, from December 2018 and February 2019.

In each video, the researchers focused on a behavior called Relaxed Open Mouth (ROM). They found out that 12 dogs and 10 horses exhibited this behavior.

The study was published in the May issue of Behavioural Processes, revealing the "two species didn't differ markedly in their play styles." They share tactics, which makes it possible for them to play with each other.

According to an email to the National Geographic by Barbara Smuts, a behavioral ecologist from the University of Michigan, "it does show that the shared language of play is what maintains their bond." The study did not document how the play relationship of the two species began.

Unlike wild creatures, dogs and horses are domesticated species. They can recognize the facial expressions of their kind and humans, "factors that may make them more attuned to others' emotions than wild creatures," Palagi said.

According to National Geographic, cross-species play isn't new. "Cats and dogs in the same household often play together. Wild animals have also been observed romping, such as a juvenile baboon and a young zebra, an adult wildebeest and a juvenile rhino, and even an adult female wolf and an adult brown bear," it said.

But for the dog and the horse, they shared the same behavior. In the study's, each session had either the dog or horse initiating the fun. When the partner responded, the dog/horse's behavior would be similar to the other animal.

In the abstract of the study, "social play is a window on cognitive and communicative abilities of species." Thanks to domestication, animals can live together without showing aggression against each other.