Kidney stones, also called renal calculi, form when minerals dissolved in urine form crystals. They can get stuck in the kidney or the ureter, a narrow tube that connects the kidneys to the bladder, which makes it very painful. 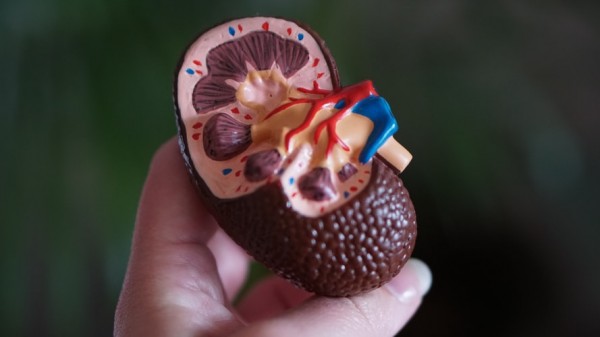 (Photo : Unsplash)
A hand holding a model of a kidney

According to Mayo Clinic, kidney stones are caused by inappropriate diet, excess body weight, some medical conditions, and certain supplements. Doctors may recommend preventive treatment to reduce the risk of recurrent kidney stones if they are at a higher risk of developing them.

One treatment involves breaking down the stones into smaller pieces so that they can easily exit through urine. This could be done by using a long thin tube up into the ureter from the bladder or through firing ultrasound shock waves from outside the body.

However, both methods may leave behind some fragments that may encourage more stones to grow. A more severe case may need surgery to remove the kidney stones.

But a new technology has been developed to prevent using surgery. In experiments using pigs, the scientists used an approach wherein they were able to move the glass beads, which act as kidney stones, along a predefined course.

Michael Bailey of the University of Washington led a team to explore a different approach in removing kidney stones from where they are stuck using a gentler ultrasound waves.

The team first tried it by giving a stone a small nudge to boost its chances of moving naturally. They did it first in 15 people, and results suggest that smaller stones can usually be made to move a little using this new approach.

New Scientist reports that the researchers have found a way to control better how the kidney stones move. They used carefully targeted sound waves to produce a ring of high pressure around the stone and trapping it in its place.

Bailey and his team tested their new approach on three anesthetized pigs. They placed glass beads inside their bladders to act as the kidney stones. The team successfully steered the glass bead along pre-chosen routes with more than 90% accuracy.

"It's really quite controllable," says Bailey, who consults for SonoMotion, a US firm that has licensed the technology and been developing non-invasive solutions for kidney stones.

But Ben Turney from the University of Oxford said that moving these spherical glass beads inside the bladder is easier as it has a large space. Moreover, he said that steering irregular-shaped crystals through a narrow tube would be a lot harder.

Although Turney thinks that the beams form the ultrasound could help push the stones out of their places in the kidney where they tend to get stuck and lodge. "Then you would hope that the system will flush them through," says Turney.

Read More: Things That We Do That Can Damage Our Kidneys