Project ITER Paves the Way for the Future of Nuclear Energy

Nuclear power provides about 11% of the world's electricity from countries such as the United States, Russia, and China. In France, they've started begun the assembly of the world's largest nuclear fusion project, ITER, which will be completed in five years.

At the launch of the project on July 28, the Japanese prime minister Shinzo Abe said, 'I believe disruptive innovation will play a key role in addressing global issues including climate change and realizing a sustainable carbon-free society.' 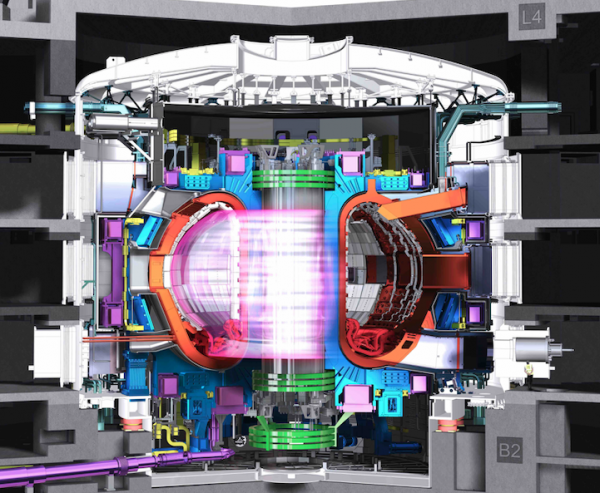 The director-general of the ITER project, Bernard Bigot said that the new source and 'exclusive use of clean energy will be a miracle' for Earth. The renewable energy will be used for transportation, buildings, and multiple industries to run on energy produced by ITER.

Plans for ITER began in 1985, but progress had been delayed. Also, despite about 60 years of nuclear research, there are still numerous technical challenges the thousands of experts will face in building the giant reactor to harness all that energy. Bigot explained, 'constructing the machine piece-by-piece will be like assembling a three-dimensional puzzle on an intricate timeline [and] with the precision of a Swiss watch.'

ITER, which is Latin for 'the way,' is a collaboration among 35 countries to advance fusion science and the future of fusion power plants. It will be the first plant to produce net energy, which is similar to the Sun's power or plasma.

The plant will produce carbon-free net energy, or the total power produced from a fusion plasma pulse after thermal energy is injected into the plasma. Unlike nuclear fission which splits atoms, nuclear fusion is combining two lighter atoms into one to mass amounts of energy.

The assembly of a tokamak, or a giant reactor device that uses a magnetic field to confine the plasma, will involve the work of thousands of international engineers and scientists. Tokamak comes from the Russian acronym for 'toroidal chamber with magnetic coils.'

Inside the tokamak, fusion atoms absorb heat to produce energy. The thermal energy will then produce steam and electricity through turbines and generators. Within the machine's vacuum chamber, gaseous hydrogen fuel converts into plasma due to extreme pressure and heat.

Read Also: Nuclear Fusion and All Its Advantages May Be Achieved, If a New "Tokamak" Design Is Effective

By December 2025, ITER will generate its first plasma. The tokamak will weigh about 3,000 tons, which is heavier than a jumbo jet, with about 200 kilometers of superconducting cables. ITER will be two times larger and capable of ten times more plasma in its chamber than the world's current largest tokamak.

India manufactured a 98-foot-diameter cryostat, a component that will cool and stabilize the reactor. Meanwhile, the United States built one of ITER's electromagnets or the central solenoid. The magnetic power is enough to lift an entire aircraft carrier.

David Kingham, the executive vice-chairman of the project said, 'we welcome the progress at ITER which we see as a great scientific project and a major endorsement of tokamak devices. But we are convinced that faster progress is possible, driven by the need for a more carbon-free energy and enabled by private investment, modular designs, new materials, and advanced technologies.'