4 Most Interesting Things Ever Found Across the Universe

For the average person, space is equal parts awesome and terrifying. Even with the rapid discoveries from both the laboratory and the space missions, the universe still has a lot of unanswered questions.

From galactic alcohol deposits to icons ripped straight off literature books, here are four of the most interesting things ever found across the universe.

A Giant Walnut in Our Solar System

In our own Solar System, Saturn is known to have as much as 82 moons - 53 are confirmed while 29 are awaiting discovery and official nomenclature - according to NASA. One of its largest moons, Iapetus, looks like the counterpart of the universe to the Earth's walnut.

A big rock with an inviting ridge at the center, Iapetus actually has a large mountain range that runs perfectly on its equator, giving the walnut appearance. The mountains that circle the satellite have an average height of 8 miles, with some parts exceeding 12 miles above surface level. To put that in perspective, Earth's Mount Everest is about 5.5 miles high from sea level.

RELATED: New moons found on Saturn: Get a chance to name them!

In October 2005, astronomers based in France's Haute-Provence Observatory discovered a new planet passing through its star. In 2008 and 2013, two separate attempts to detect and monitor the exoplanet HD 189773b were made and confirmed that it is a blue planet, but the size of our Jupiter.

While HD 189773b looks like a larger Earth, its native weather is unforgiving for life as we know it. What makes it interesting is its surface experience winds that blow up to 5,400 miles per hour, at Mach 7 or 8,700 kilometers per hour. This speed is equivalent to seven times the speed of sound. Moreover, it is made up of silicate particles - basically microscope glass shards. These silicate materials are so abundant, it actually gives the planet its bluish hue. With these many particles, the average temperature of the gas giant melts and condenses the particles into shards of glass flying at Mach 7.

The Eye of Sauron

For fans of The Lord of the Rings franchise, the Great Eye is an instantly-recognizable insignia. The huge, flaming eye is an almost all-seeing, fear-mongering element immortalized in the Peter Jackson Trilogy. 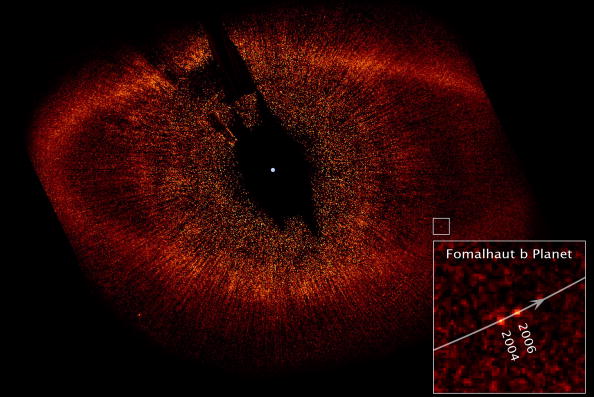 (Photo: Photo by NASA via Getty Images)
IN SPACE - UNDATED: In this handout provided by NASA, a visible-light image from the Hubble Space Telescope shows a red ring of dust and debris that surrounds the star Fomalhaut and the newly discovered planet, Fomalhaut b, orbiting its parent star.

However, astronomers have apparently found its real-life instance across the universe, in the spiral galaxy NGC 4151, there is a young star they dubbed "The Eye of Sauron." Fomalhaut, the star with designation Alpha Piscis Austrini, is a class A star with its own debris disc. The result? A lone star in the middle, a dark space surrounding it followed by a huge mass of rocks and ice about twice the width of our own solar system.

A Galactic River of Alcohol

In the Institute of Radio Astronomy in the Millimeter Range (IRAM) in the Spanish Sierra Nevada, there is a large telescope for making astronomical observations. One of its most interesting discoveries is the Sagittarius B2, a giant molecular cloud about 120 parsecs from the center of the Milky Way.

Although it is a cloud, it has a complex composition of varying densities and temperatures. One of the most abundant substances found in the cloud is an ester, ethyl formate. This chemical smells like rum and is responsible for giving that distinct raspberry flavor. Aside from ethyl formate, the huge cloud drifting across the universe also contains other types of alcohol.