WATCH: Beetle Survives Death Even After Being Eaten by a Frog

A Japanese researcher has identified a species of beetle often eaten by frogs that has an incredible escape behavior. Amazingly, these beetles crawl their way throughout the frog's body until it finds its way out at the "back door."

The beetle appears to be in good health after it's a la escape in Alcatraz's behavior. 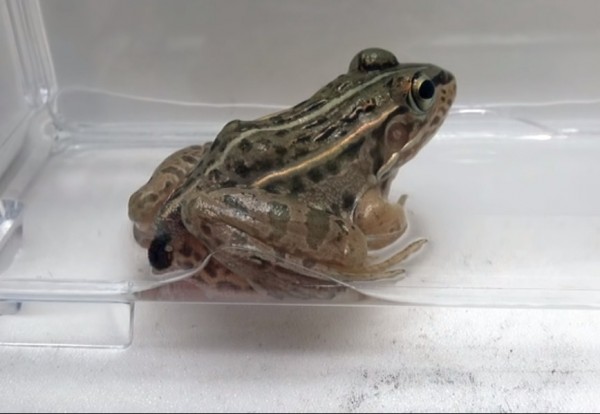 Beetle Escapes at the Back Door

Typically, when one organism is eaten by another organism that is higher in the food chain, they die. It is a gruesome reality of nature that no one can escape. Well, that is unless you are a Regimbartia attenuata.

It is a type of beetle that does not let being swallowed the end of its life. Instead, this beetle makes a break for the back door of its predator.

According to a new study published in Current Biology, the beetle's incredible unique escape behavior helps it avoid being killed. Its natural predator is a frog, in which the beetle is being swallowed whole. But by crawling its way through the frog's guts, it prompts it to poop the beetle out.

Lead researcher Dr. Shinji Sugiura wanted to see the relationship between beetle and frog, so he conducted his research. He was in Japan when he was doing his research, and he found out that beetles and frogs inhabit the same locations.

He got some of them and put them in his laboratory. Most likely, the results should show the frog eating the bug and killing it through digesting it, or the frog might spat the bug back out, as is sometimes the case if a bug has a strong defense mechanism.

Sugiura recorded the two animals' interactions as he put them in a clear plastic box. As expected, the frog immediately gobbled down the beetle, but the frog did not spit the beetle back out.

He kept on observing until to his amazement, the beetle has escaped the frog's intestines more than two hours later. More so, the beetle appears to be as lively as it was when the frog ate it. The beetle came crawling out the opposite end of the frog- or its "back door."

What's more strange is that the frog seems not to mind at all or maybe did not even notice that its previous meal had escaped unscathed from its guts.

Dr. Sugiura was surprised by his findings and decided to replicate the experiment with more frogs and beetles. He thinks that there must be some bizarre fluke that happened during the first experiment.

But many trials have proven that the beetles eaten by the frog only emerge from the rear end of their predator within the average period of six hours. Granted that its success rate is only 90%, this only means that these species remain alive almost all of the time even after being eaten.

He also tried the experiment with a different species of beetle, but they all died. It suggests that there must be something special on the protective shell of R. attenuata.

Lastly, to prove that bugs crawl inside the frogs to escape, Dr. Sugiura immobilized the beetles. All of them have failed to escape, which demonstrates that they are venturing through their predators' insides to escape.