Around five rare fire tornadoes, also known as a fire whirl or fire devil, swept through Northern California, reported local authorities, which started from a 20,000-acre wildfire. The National Weather Service (NWS) is currently investigating the possible cause of the 'extremely dangerous fire behavior.' The fires started on Saturday, August 15, and are still being contained.

Usually, people can safely investigate the aftermath of a tornado after it has passed, explained meteorologist Dawn Johnson from Reno, Nevada. However, after a 'firenado,' a massive wildfire continues to burn where it passed.

Although wildfires are common in, fire-induced tornadoes are 'so unusual,' described meteorologist Ben Gelber. Gelber explained that fire tornadoes require a combination of extreme heat from the fire, turbulent winds, and uneven terrain. 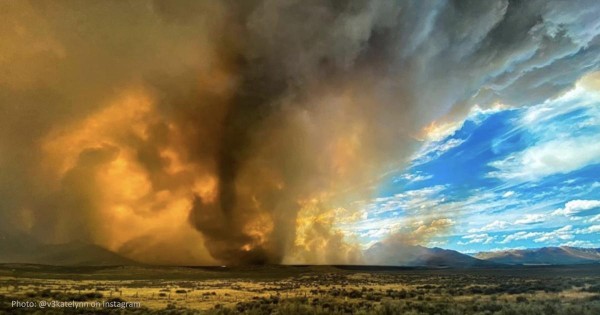 (Photo: @v3katelynn on Instagram)
A passerby took this photo of the fire as they traveled South through Highway 395.

The resulting fire tornadoes formed pyrocumulonimbus clouds above the extreme heat, closely resembling the explosive plumes above an erupting volcano. Smoke plumes were up to 30,000 feet high as the clouds formed a thunderstorm, creating lightning strikes as well.

Despite the name, fire tornadoes are less tornado and more fire vortex with a whirlwind motion. As it blazes through the land, elements such as gas released from plants fuel the fire. Moreover, the fires were observed to rotate clockwise, unlike tornadoes, that typically move counterclockwise.

A fire tornado in California because it wouldn’t be 2020 without one pic.twitter.com/5HbJVsugVm — Natasha Del Riego (@ndelriego) August 16, 2020

The blaze started near the town of Loyalton, California, and continued to travel towards Nevada and was only 5% contained within 24 hours. Several other areas, such as Sierra Counties, Plumas, and Lassen, had been under mandatory evacuations.

A red flag warning has already issued in Central California, including the San Francisco Bay Area. The NWS in the Bay Area posted a notice explaining that winds onshore, dry fuels, and dry lightning from thunderstorms may cause rapid spread of the fire tornado if it arrives in the area.

The Truckee Meadows Fire and Rescue reported that the Loyalton Fire passed through Highway 298. Many cars and trucks were left stuck on the road as the team tried to put the fire out. Fortunately, there were no reported injuries or deaths.

One of the fire tornadoes, the Lake Fire in northern Los Angeles, is about 12 percent contained after blazing through over 17,000 acres of land. It moved towards the forest land, but residents from western areas such as Antelope Valley has been forced to evacuate due to the wind patterns that bring Lake Fire to the area. Another fire tornado was spotted near Corona, a few miles east of L.A. but was soon contained. 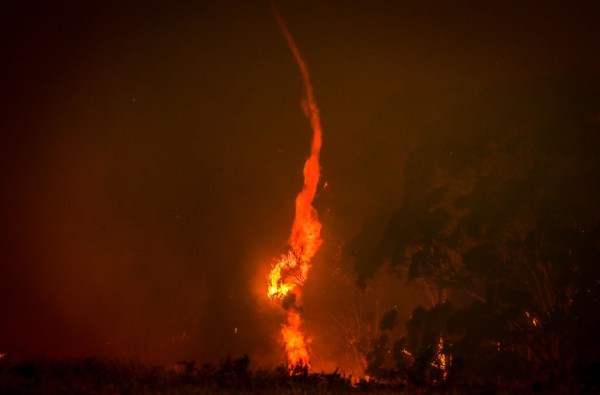 READ: What Makes Forest Fires Hard to Put Out?

The last fire tornado that swept through California was the Carr Fire in 2018. It destroyed over 1,000 homes in the northern city of Redding, where 40,000 people had to evacuate. There were also eight reported deaths.

The Carr Fire was similar to an EF-3 tornado on the Fujita scale with the wind vortex moving at 143 miles per hour, reported the National Weather Service. All instances of fire tornadoes came about from similar weather conditions that started the Australian wildfires at the beginning of this year.

READ NEXT: Zombie Fires in the Arctic are Coming Back to Life, What Could This Possibly Mean?