Climate change may cause a comeback for several diseases in Europe. Epidemics of smallpox, zika virus, and dengue season may soon arrive further up the Northern hemisphere as conditions become suitable for the Aedes aegypti. Melting permafrost may also mean the resurgence of ancient disease-causing bacteria.

Vladimir Romanovsky from the University of Alaska explained how microorganisms could survive in a frozen state for a long time. Due to carbon emitted from fossil fuels, permafrost in Alaska, Canada, and Russia have been melting and absorbing three times more carbon than before.

Recently in July, the Milne Ice Shelf collapsed, which was the last remaining ice shelf in the Canadian Arctic that was fully intact. Around 30 square miles had broken off.

According to the United Nations Intergovernmental Panel on Climate Change, permafrost in the northern hemisphere will have a 25 percent decrease by 2100. As the frozen ground continues to thaw as a result of global warming, microorganisms in soil particles move towards the surface and begin to thrive again in the environment.

Genomics professor Jean-Michel Claverie from Aix-Marseille University explained, "When you put a seed into the soil that is then frozen for thousands of years, nothing happens." When the earth warms up, the once-frozen seed can germinate. "That is similar to what happens with a virus."

In his lab, scientists have been able to revive ancient Siberian viruses from over 30,000 years ago. The microorganisms had once attacked Neanderthals, mammoths, and other ancient species, Claverie explained. "Some of the viruses that caused their sicknesses are probably still in the soil."

There may be a resurgence of Anthrax, bacteria that have been frozen in permafrost for hundreds of years, said Evengard. In 2016, there was a single reported death from the disease, which was last seen in Siberia 75 years before that. Harmful pathogens might also be found in infected carcasses that have been kept in permafrost.

Older strains of common illnesses such as smallpox and influenza may also be buried deep in the permafrost. These diseases had killed millions in Europe in the early 1900s. Fortunately, there are already developed vaccines for these diseases. Nevertheless, scientists continue to worry about the 'industrial exploitation of the Arctic,' said Claverie, such as nuclear power plants. 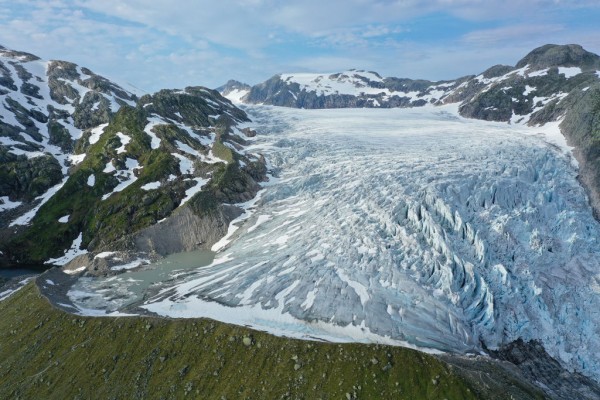 (Photo: Sean Gallup/Getty Images)
FJAERLAND, NORWAY - AUGUST 12: While the many arms of the Jostedal glacier have gone through a natural process of expansion and recession over the past centuries, global warming has accelerated their melting over recent decades so that the glaciers are losing both length and depth.

Since 2010, the Europe Centre for Disease Prevention and Control (ECDC) has reported 40 cases of locally transmitted dengue. Experts fear that over the next few years, Europe may report more cases of tropical diseases and have dengue seasons due to climate change.

READ NEXT: Massive Chunk of Canada's Last Ice Shelf Reduced by More Than Half Creating a Manhattan-Iceberg