The Galapagos Islands, west of Ecuador, is comprised of about 25,000 islands and is home to various species of seabirds, penguins, tortoises, and many other species flora and fauna. Around 500 endemic species on the islands have been threatened by human activity and non-native animals such as cattle, cats, and goats.

Many non-native species were introduced to the Galapagos Archipelago by pirates. Soon, the islands were colonized and inhabited with people, cattle, and other animals.

The archipelago's marine life is also rich with diversity, from sea cucumbers to Galapagos sea lions and bottlenose dolphins. By 1985, the islands were a biosphere reserve, just a few years after it became a UNESCO World Heritage Site. 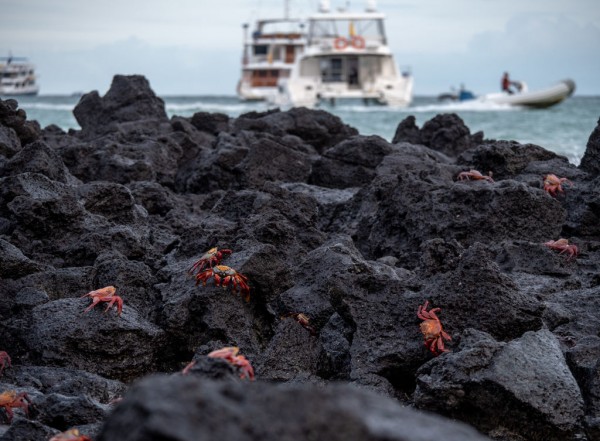 Alongside the National Park Directorate and the Ocean Exploration Trust, the Charles Darwin Foundation (CDF) used Remote Operated Vehicles to probe ecosystems up to 11,000 feet deep.

International marine scientists recently discovered several species of invertebrates in the archipelago's deep waters, 'reminding us how little we know about the deep sea,' shared Dr. Nicole Raineault of the Ocean Exploration Trust. Here are the 31 new invertebrate species reported by the Galapagos National Park:

Ten new species of bamboo corals and four species of octocorals, which has eight symmetrical colonial polyps, were found in the deep waters of the Galapagos. One of the new species included 'the first giant solitary soft coral known for the Tropical Eastern Pacific,' shared the Charles Darwin Foundation.

One new species of the brittle star was observed in the deep Pacific waters surrounding the islands. Also known as the serpent star, the relative of starfish are known to crawl around the seafloor with its five, thin, flexible arms. Their forked and spiny arms can grow up to 23 inches long (60 centimeters).

Read Also: Marine Species are Moving Towards the Poles Six Times Faster than Terrestrials Amid Climate Change: Here's Why

The discovered 'a new genus of glass sponge that can grow in colonies of over one meter in width,' shared the Charles Darwin Foundation. The international team counted a total of eleven new sponge species. The unique species lack a brain or central nervous system but can regenerate parts broken off by water currents.

Crab species such as the common red rock crab or the Sally Lightfoot Crab have long existed in the Galapagos. Four new species of squat-lobsters were discovered by the international team. Closely related to the hermit crabs, they lack shells on their back and have sharp claws to defend themselves from predators. Squat-lobsters have been found in the waters of Baja California all the way north in Alaska in waters.

The waters from Darwin Island to Wolf Island also house the largest population of sharks. The Galapagos Marine Reserve protects these seamounts from fishing activity and deep-sea mining. 'Now,' said marine scientist Pelayo Salinas de Leo, 'The many discoveries made on this expedition showcase the importance of deep-sea exploration to developing an understanding of our oceans... it is our responsibility to make sure they remain pristine for the generations to come.'

Read Also: Probiotic Bacteria Like Those Found in Yoghurt Can Boost Coral Health in the Great Barrier Reef: Study

Check out more news and information on New Species on Science Times.