Pentagon Allows Five Drone Makers to Supply the US Government

The United States Department of Defense (DOD) has recently approved five manufacturers to sell small Unmanned Aircraft Systems (sUAS) to the US Government - it's military and associated federal agencies - as a culmination of an 18-month effort.

Through its Defense Innovation Unit (DIU), the US DOD made the announcement Thursday, August 20. The DIU is a subunit under the department described as an "organization that accelerates commercial technology for national defense." Five manufacturers received the accreditation, with four US companies Altavian Inc, Skydio Inc, Vantage Robotics, and Teal Drones; the fifth being Parrot SA, from France. 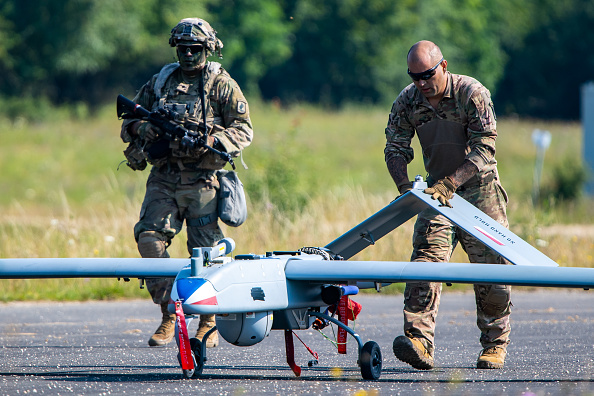 (Photo: Photo by Lennart Preiss/Getty Images)
HOHENFELS, GERMANY - AUGUST 10: Soldiers of the U.S. 173rd Airborne Brigade push an Unmanned Aerial Vehicle down an airfield during participating in the Saber Junction 20 military exercises at the Hohenfels training grounds on August 10, 2020, near Hohenfels, Germany.

The approval for the five companies to supply the US Government was announced as the culmination of an 18-month effort with the Defense Innovation Unit's support for the US Army's Short Range Reconnaissance (SRR) program of record for this sUAS. The SRR program by the Army aims to develop a rucksack packable quadcopter that will provide a small unit with a fast deploy situational awareness tool.

Building from this SRR progress over the years, the DUI has developed its Blue sUAS operation. The Blue sUAS initiative allows the government to acquire the required trusted small Unmanned Aircraft Systems that can replicate the standard specs included in the army's SRR program of record such as physical and software architecture.

However, the Blue sUAS drones boast alternative ground control and radio specifications, catering to the projected variety of end-users from the military and the federal government.

RELATED: ArcticShark: The Unmanned Aircraft Is Ready To Collect Important Data Of The Arctic Atmosphere

"Blue sUAS represents a tremendous first step toward building a robust and trusted UAS domestic industrial base that ensures sustained delivery of highly-capable, secure UAS to the warfighters that depend on it," Acting Undersecretary of Defense for Research and Engineering Michael Kratsios said in the DOD press release.

"I think the fact that we started a program with a single requirement around an Army effort and were able to scale it across not only all of the services in DoD to include (U.S. Special Operations Command) and the combatant commands as well as the inter-agency federal government partners - at least to me - is super exciting," Chris Bonzagni said in an interview with C4ISRNET. Bonzagni serves as a program manager in DIU's autonomy portfolio and a resource person on the sUAS subject.

The five partners are set to begin their transaction with the government, based on the General Services Administration (GSA) schedule, by September 2020. While the drones to be made available under the Blue sUAS initiative will follow SRR aerial vehicles, the vendors are free to provide their proprietary ground control systems and radio configs.

Both the SRR and Blue sUAS are expected to comply with Section 848 of the National Defense Authorization Act (NDAA), Fiscal Year 2020. The provision effectively bans the operation or acquisition of drones, or UAS, that are manufactured in China.

The DOD press release noted that small drones have been available since the early 2010s, adding that "foreign military forces and non-state actors" have utilized the technology for surveying and reconnaissance purposes. In fact, a recent amendment to the NDAA for the Fiscal Year 2021, made by Wisconsin Representative Mike Gallagher seeks to expand Section 848 by including drone components in the ban - flight controllers, radios, computer chips, printed circuit boards (PCBs), cameras, or even gimbals.

RELATED: Muscle Signal Lets You Pilot A Drone To Survey Sites Or Inspect Off-Shore Platforms That Are Hard To Reach

"We need an alternative to Chinese-made small drones and Blue sUAS is a first step in achieving that objective," said DIU director Mike Brown.

Check out for more news and information on The Pentagon in Science Times.