Mummification is often associated with the traditions of Ancient Egyptians. Aside from human mummification, the same ritual of respect and reverence was given to certain animals as well. Scientists from Swansea University analyzed the remains of three animals to understand more about life, death, and deification of the mummified creatures.

Animals such as crocodiles, snakes, lion cubs, cats, and birds were mummified as the Ancient Egyptians believed that these sacred animals were the reincarnation of several gods. The mummified animals were worshiped in temples and were also a type of offering to their gods.

Normally, the animals' keepers would bring the dead animals to temple priests who conducted the embalming process. The priests would then remove the organs, have the bodies dried out, wrap the creature in linens, then keep the animals in the temple to be worshiped or sacrificed.

The new study has been published in the Nature journal Scientific Reports, using laboratory-based X-ray microcomputed tomography (microCT) to analyze the mummies without altering their structures. Previously, archaeologists unwrapping a mummy to analyze the remains would mean damaging the remains.

'In the past, when people unwrapped mummies, everything inside moved around,' explained Rich Johnston. 'It would be difficult to put the skeleton back together in the position it was mummified in.'

Using micro-CT scanning, the team was able to analyze a bird, a cat, and a snake. Johnston shared that the scanned imaging was high resolution, revealing details on what conditions the animals lived under and how they died. The team was the first group of people to view the inside of these mummies which had been preserved for thousands of years.

One of the mummified animals was an 'oval package' or a snake that was coiled up. The micro-CT imaging revealed that the snake was a young Egyptian cobra. Damage to the kidneys and skull indicated how the creature had lived. 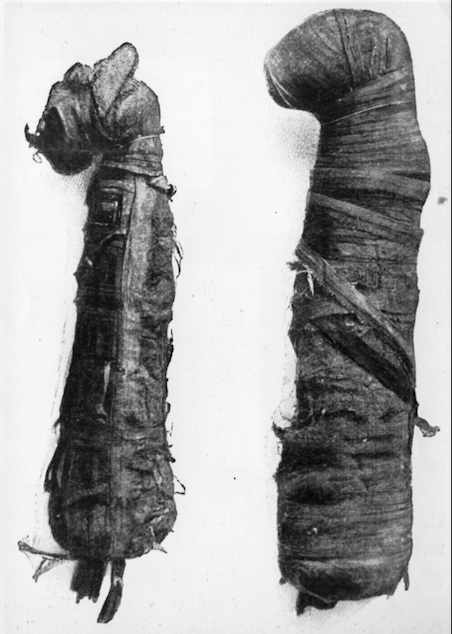 Kidney damage was most likely the result of water deprivation As for the right side of its skull damage, Johnston explained that its keepers 'used the snake like a bullwhip.'

They also observed that the snake's mouth was intentionally left open with its throat full of natron, a type of resin. These are indications of the 'Opening of the Mouth' ceremony, meaning that in the afterlife, it could enjoy offerings, breathe, and eat.

Next, a hunting bird called the Eurasian kestrel was identified. The team did not find enough details to identify its cause of death.

Third, was a cat, one of the most common animals seen in depictions of Ancient Egyptians. The cat seemed to have a violent death since its neck vertebrae were severed from its body - a sign that it was strangled. Another theory is that the cat's neck was broken after its death so that once mummified, the head would remain upright.

The micro-CT scanning of the cat's teeth revealed that it was a young kitten that was five months old. The technology also enabled the team to create three-dimensional models of the mummies for a thorough analysis.

One specimen, Johnston shared, he made as large as his house so he could wander through it and hopefully discover something new every time. However, enlarging 3D images worked best on small specimens, he explained, which is why it would be more efficient to study a single body part instead of an entire mummified human.

READ NEXT: The Mummy Shroud Rediscovered After 80 Years At The National Museum Of Scotland