New South Wales and Canberra is set to experience the effects of this weekend's chilling temperatures brought by a freak polar blast that only happens once every 15 years. Icy winds, heavy rain, and snow are expected to cover the east coast of Australia this weekend.

Dean Narramore of the Bureau of Meteorology said that the strong cold front would drag air all the way from Antarctica with rain showers, hail, thunder and snow across south-eastern Australia.

He explained that the snow would fall to at least 600 meters in Victoria and across New South Wales Central and Southern Tablelands.

Furthermore, outer parts of Melbourne will also experience snow, including Mount Dandenong, Mount Macedon, as well as some parts of the central and eastern ranges. The heavy rainfall combined with strong winds will lead to blizzard-like weather at times for mountainous areas on Friday and Saturday, Narramore said.

He further warns that the snow can reach 100 centimeters, leading to many road closures and would make driving conditions dangerous and hazardous.

Due to the wild winds and cold temperatures that are likely to continue until Monday, August 24, many parts of Australia will also experience the coldest day this year.

Bureau of Meteorology's Jane Golding said the freak polar blast would make temperatures to plummet for as low as 50 degrees Fahrenheit (10 degrees Celsius) below the average on Saturday. Over the weekend, high winds and cold temperatures are expected as well as some snow to sweep across the New South Wales that are generally not seen.

The polar blast is slowly starting as gusty winds developed over a lot of areas in NSW, and those winds have blown some dust over its western side. 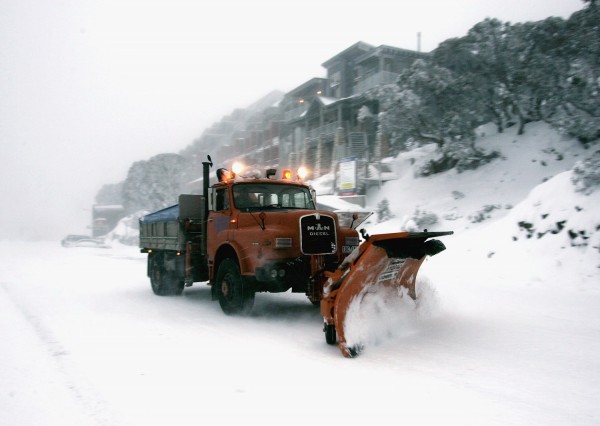 (Photo: Getty Images)
MOUNT HOTHAM, AUSTRALIA - JUNE 16: A snow plough clears the Great Alpine Road during the start of the Australian snow season at Mount Hotham on June 16, 2005, in Mount Hotham, Australia. Approximately 30 centimeters of snow has fallen with more heavy falls expected over the next two days. (Photo by Mark Dadswell/Getty Images)

It will snow for at least 36 hours in Lithgow, Cooma, Batemans Bay, and Orange this weekend.

It will be raining in Adelaide with a maximum temperature of 42.8 degrees Fahrenheit (6 degrees Celsius) this weekend.

Fortunately for Perth residents, they will enjoy a mostly sunny day on Friday before experiencing the cold weekend.