The closest image of the comet C/2020 F3 NEOWISE was recently captured passing by the Sun by the NASA/ESA Hubble Space Telescope. The images reveal it's dusty tail as well as a shell surrounding the comet's nucleus called the coma.

Comet NEOWISE has been the brightest comet passing by since the Hale-Bopp comet in 1997. It closely approached the Sun in early July and is head back into outer space. The Earth will view the comet again after 7,000 years.

The comet was first discovered this year in March by NASA's Near-Earth Object Wide-field Infrared Survey Explorer (NEOWISE) mission, an asteroid-hunting project. The project measures asteroids and comets from previous WISE images to trace objects in space. The NEOWISE mission has completed nearly 34,000 infrared detections, as well as 158,000 minor planets.

The Hubble Space Telescope captured a high-resolution photograph of the comet at its brightest. The comet travels at about 144,000 miles per hour or 40 miles per second and at about a 27 million-mile distance from the Sun.

Scientists were also impressed by how close comet NEOWISE traveled towards the Sun compared to previous comets, which disintegrated from extreme heat. This is also why earlier attempts of photographing comets like comet ATLAS had failed.

When comets reach thermal and gravitational limits near the Sun, they often break apart. Surprisingly, NEOWISE's solid nucleus survived the journey with a core made of ice with a nearly three-mile-long diameter. The telescope image was able to capture part of the cloud dust and gas surrounding the nucleus measuring about 11,000 miles across.

The nucleus also seemed to have a pair of jets shooting out, emerging from the cloud of dust and gas. The jets curve outward like a fan as the nucleus rotates, which is typical of dust and gas is compressed at a high velocity.

Another detail that the Hubble images revealed is the comet's colored dust, which changes as it moves further from the Sun. This may be evidence of the effect solar heat has on a comet's coma and dust.

The telescope has a far better resolution than we can get with any other telescope of comet NEOWISE, shared Qicheng Zhang from Caltech. "That resolution is very key for seeing details very close to the nucleus. It lets us see changes in the dust right after it's stripped from that nucleus due to solar heat, sampling dust as close to the original properties of the comet as possible." 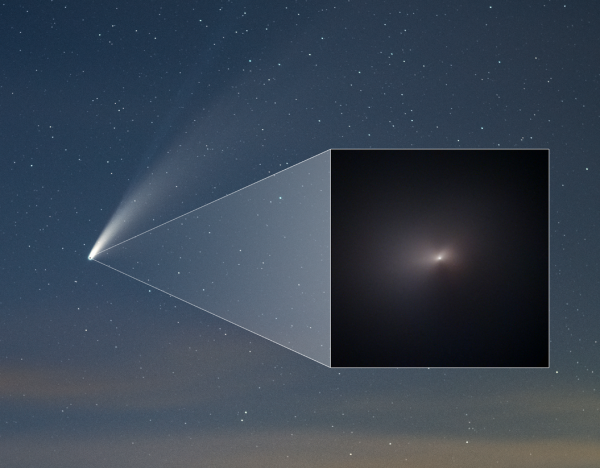 The Hubble Space Telescope has also been recently used to capture phenomena such as lunar eclipses and to identify oxygen or possible traces of life on other planets that may be habitable. One of Hubble's notable contributions to Earth is detecting the planet's ozone layer by using the Moon. Sunlight was reflected with the Moon acting as a mirror, which then passed through Earth and reflected back towards the telescope. Now, Earth's 'biosignature' is being used to detect similar signs of life on exoplanets.