Doctors Can Use Selfies To Detect Cardiovascular Diseases

Who would have thought that sending a selfie to the doctor can help them detect heart disease? According to a new study, sending selfies is a cheaper way of diagnosing cardiovascular diseases.

The study, published in the European Heart Journal, showed how a deep learning-based computer algorithm could analyze the four photographs of a person at different angles.

Although this new method still needs further research and testing on a large number of people from diverse ethnic backgrounds to be proven accurate and true, this new technology of analyzing selfies holds so much promise. 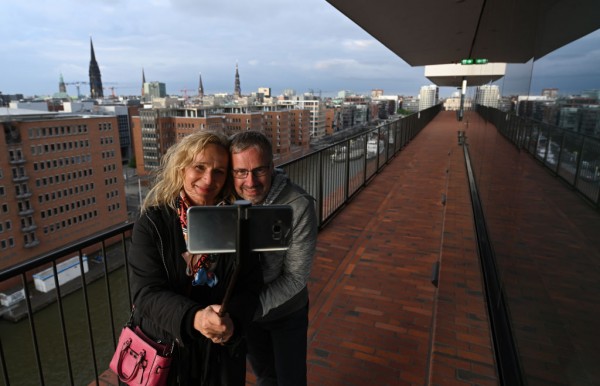 (Photo: Getty Images)
HAMBURG, GERMANY - MAY 25: People take a selfie as they enjoy the view at the reopening of the Elbphilharmonie after being closed during the coronavirus crisis on May 25, 2020, in Hamburg, Germany. (Photo by Stuart Franklin/Getty Images)

Professor Zhe Zheng, who led the research and the National Center for Cardiovascular Diseases's vice director and Fuwai Hospital, Chinese Academy of Medical Sciences and Peking Union Medical College's president, said that their study is the first to exhibit that artificial intelligence (AI) can be used to examine faces in detecting coronary heart diseases (CHD).

He also said that it is a step toward developing a deep learning-based instrument that could assess the risk of heart disease in outpatient clients and take selfies to do their own screenings.

Furthermore, Professor Zheng said that their primary goal is to create a self-reported application for high-risk communities in order to evaluate heart disease risk in advance before a visit to a clinic. According to them, it is a cheaper, simpler, and an effective way of detecting patients who need further assessment.

But the algorithm in examining these selfies still needs further refinement and testing to other populations and ethnicities.

Studies show that certain facial features are associated with heart disease. These could be seen in the ear lobe crease, wrinkles, thinning or gray hair, xanthelasmata, and arcus corneae. But these are challenging to predict and quantify the risk of heart disease accurately.

Professor Xiang-Yang Ji, Brain and Cognition Institute's director in Tsinghua University's Department of Automation, together with Professor Zheng, and colleagues studied 5,796 patients from eight different hospitals in China from July 2017 until March 2019.

Read Also: Game's Not Over For COVID-19 Survivors As They Face New Threat of Long-term Disability and Illnesses

The researchers used coronary angiography or coronary computed tomography angiography (CCTA) to investigate the blood vessels of the participants. Then the team divided the patients into training (90%) and validation (10%) groups.

The patients were photographed in four different angles, with one frontal, two profiles, and one picture with the view from the top of the head. The nurses interviewed the participants in which information they gathered was used to build a deep learning algorithm.

They then tested the algorithm to 1,013 patients of Han Chinese ethnicity, in which they found that the algorithm was better in predicting heart disease risk than existing methods, such as the CAD consortium clinical score and the Diamond-Forrester model.

How Effective Is the New Method in Predicting Heart Disease Risk?

According to Professor Ji, the algorithm had a moderate performance, which can be used to predict the risk of heart disease quickly based on a person's photo alone. Compared to other parts of the face, the nose, forehead, and cheeks contributed more to the algorithm.

But its specificity still needs improvement as it could suggest a false positive. Using selfies as a method in screening for heart disease risk enables a simpler and effective way to screen the general population from taking the unnecessary clinical evaluation.

Analyzing selfies can also be useful in underfunded areas and have weak screening programs for cardiovascular diseases. As easy as taking a selfie will allow people to have first-line diagnostic testing with CCTA.

Read More: Not in the Mood for Exercise? Scientists Say Simple Stretches Could Improve Blood Flow and Prevent Heart Disease

Check out for more news and information on Coronary Heart Disease on Science Times.