A massive lava lake was firmed in the belly of Kilauea volcano in Hawaii when it erupted in 2018. The water inside it has been bubbling since then and was known as the world's hottest body of water with temperatures ranging from 176 degrees Fahrenheit to 185 degrees Fahrenheit.

The lake is as deep as One World Trade Center in New York City said the US Geological Survey who is closely monitoring it. But scientists are baffled about it as there are only a few volcanic lakes that reach above 176F. They believe it might be a sign of upcoming hazards, such as steam-blast explosions.

Volcanologist Don Swanson of USGS' Hawaiian Volcano Observatory said that Kilauea volcano's next eruption might happen slowly and could make the lake evaporate.

Not to be an alarmist, but he wanted to warn the public that there is an increasing possibility of an explosive eruption happening in Kilauea, the youngest and most active shield volcano in the southern part of Hawaii also known as the 'Big Island.' 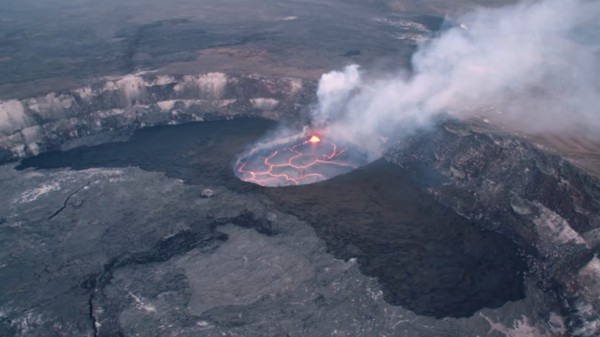 Although the volcano last erupted in 2018, it was not until 2019 that helicopter pilots first spotted the mysterious lake as they noticed a body of water bubbling into the lowest part of the crater.

Moreover, NASA satellite images have shown that the water levels in the lake have steadily risen ever since its formation. The lake is said to be five times larger than a football field and is about 100 feet deep with a rusty brown color on the surface perhaps due to the chemical reactions in the water.

As of now, Kilauea volcano shows no sign of erupting, but the US Geological Survey is closely monitoring it in case such event may happen and it may also provide another window into what is happening beneath the lake's surface.

Authorities have already collected some samples from the heated lava lake and monitors the lake's temperature changes using thermal cameras.

USGS Hawaiian Volcano Observatory (HVO) explains that it is not easy to measure the lake temperature as the steam rising from the water surface that mixes with the air were much cooler than the actual water in the lake. Plus, a steam layer masks much of the underlying water surface.

They added that seeing through steam is the key to measure the water surface temperature. To do that, they will have to collect and analyze hundreds of images through the steam and get an estimated hot temperature reading.

It is unusual for lava lakes to reach a temperature above 176 degrees Fahrenheit. So experts are baffled with the lava lake in Kilauea volcano. They have two explanations for why the lava lake's temperature is so extreme and what makes it keep increasing.

First, they believe that it could be coming from the residual heat in collapsed rubble at the crater's base heated by the lava column before the volcano erupted in 2018.

The second reason they came up with is that the temperature might have been caused by the neighboring gas vents spewing steam at 302 degrees Fahrenheit.

Over the past year, the temperatures of the lava lake have remained in the same range, and so far experts have yet to see any significant change.

Read More: Eruption of Alaska's Okmok Volcano Contributed to the Rise of the Roman Empire, but How?

Check out more news and information on Volcano Eruptions on Science Times.