A study published in the journal Radiology: Cardiothoracic Imaging on Thursday, August 27, reports the characteristic traits from pulmonary injuries caused by using vape or e-cigarettes. The most common characteristics of the observed samples include multifocal ground-glass opacity and consolidation, as well as scan patterns similar to subacute hypersensitivity pneumonitis. 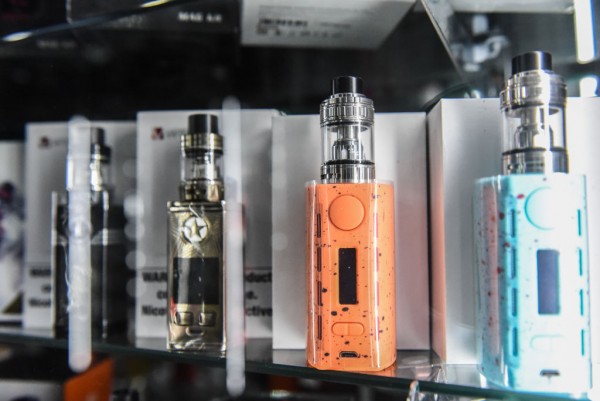 (Photo: Photo by Stephanie Keith/Getty Images)
NEW YORK, NY - DECEMBER 19: Vaping and e-cigarette products are displayed in a store on December 19, 2019, in New York City. Congress raised the legal age to smoke or vape to 21. According to the FDA, in 2018, more than 3.6 million middle and high school students across the US used e-cigarettes.

E-cigarettes and vaporizers (vapes) are electronic nicotine delivery systems that replace traditional tobacco products by heating juices - a mix of nicotine, flavorings, and additional chemicals. The vapor is an aerosol mixture inhaled by the user. The use of these electronic nicotine delivery systems has seen a rapid increase in the past few years, especially among the youth. A preliminary report from the University of Michigan illustrates that e-cigarette and vape usage among secondary students have roughly doubled from 2017 to 2019.

In 2019, the US Centers for Disease Control and Prevention (CDC) had received the first report for a new condition called EVALI - Electronic Cigarette of Vaping product use-associated Lung Injury. It was determined by three criteria: (1) e-cigarette or vape use within 90 days from the onset of the symptoms, (2) abnormalities on chest imaging (CT, radiology), and (3) exclusion of other injury sources (infection, trauma, etc.). Since the CDC received its first case, it has rapidly risen to 3,000 hospitalizations and 68 fatalities.

Michael B. Gotway, MD, a radiologist from Mayo Clinic in Scottsdale, Arizona, expanded on a previous study that found peculiar lung injury patterns found in young people who used vape. In the updated research, the team from Mayo Clinic examined 26 patients who have been positively diagnosed with EVALI, had undergone CT scans and were subjected to biopsy or other tissue removal procedures.

The researchers then grouped the CT scan patterns according to recognized and previously available patterns. One of which is ground-glass opacity, which appears white or greyish on CT scans instead of the normal black scans in normal, healthy lungs. Another pattern found among the patients was consolidation or a patch of lung tissues that appear whiter than other parts of the lungs on CT.

RELATED: How Do CT Scans Work?

"We read the CT scan and then plugged it into one of those patterns and correlated that with histopathology," Dr. Gotway said. He added that ground-glass opacity appears to be the most common pattern associated with EVALI, with consolidation in some cases.

Following these most common patterns were CT scan patterns reminiscent of subacute hypersensitivity pneumonitis. This condition is usually associated with long term exposure, either intermittent or continuous, to low doses of antigen. It is generally characterized by the inflammation of lung tissues.

For the research team, establishing a link between these observable CT scan patterns with the EVALI could serve as a significant diagnostic tool, reducing lung biopsies, which, in turn, reduce both the expense and the lead time required. It could help physicians treating patients, especially young people, who experience common symptoms like shortness of breath and chest pains.