Can Elon Musk's Neuralink Overcome the Complexities of the Human Brain?

A pig named Gertrude has had an experimental Neuralink computer chip in her brain for two months, shared Elon Musk. Since last year, his goal was for people with neurological disabilities to someday be able to control phones or computers by using their mind. 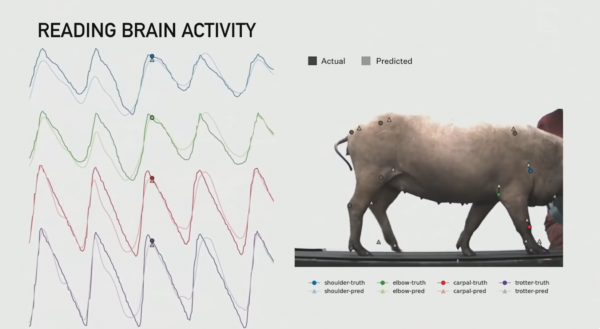 Musk compares having the computer chip implant to using 'a Fitbit in your skull with tiny wires.' Moreover, he hopes that the chip can also help cure neurodegenerative disorders like Parkinson's and Alzheimer's. He has also anticipated that in the future, the human race will need Neuralink during the time of 'superhuman cognition' to fight against artificial intelligence that may be powerful enough to end the human race.

In the webcast, Gertrude, which Musk described as a high-energy pig, was introduced as one of the animals in the 'three little pigs' demonstration. A graph tracked her neural activity as she searched for and ate food. The processor from the chip within her brain revealed that her snout was active and looking for food, which sent wireless signals that were seen in the graph.

Since last year, Musk shared that the Neuralink chip has been improved and simplified. It is about the size of a coin and small enough to 'fit quite nicely in your skull.'

The neurotechnology company has been developing implantable brain-machine interfaces since 2016. Aside from working on computer chips, they are also developing a device similar to a sewing machine, which they call a neurosurgical robot, that can embed thread-like electrodes into the brain.

The flexible electrode 'threads' have been designed to have as many as 3,000 electrodes per array. The robot can insert six threads, which contains 192 electrodes, every 60 seconds. The threads are individually and precisely placed into the brain, not to disturb the natural brain structure and flow of blood vessels.

The electrodes are then placed within a small computer chip for digitization and amplification. Using a USB-C cable, it described Neuralink, records all the neurological channels simultaneously, and streams all of the data from the computer chip.

CHECK THIS OUT: 5 Companies Involving Elon Musk and What They're Up To

Complexities of the Human Brain

Arj Benjamin from the Kording Lab at the University of Pennsylvania shared that since the human brain is so complex, Musk's technology may not be fully efficient. When the chip records all the data from neurological activity, he explained, Neuralink would need to decode all of it.

Someday, the technology may "hit the barrier that is our lack of basic understanding of how the brain works," regardless of how many neurons the data was recorded from. If neural code is not understood, said Benjamin, then decoding goals and movement plans would be difficult to achieve.

Despite the lack of knowledge on understanding the full capacity and complexities of the human brain, Musk is determined to start human trials soon. During the webcast, Musk was asked by interviewers if the chip could be used to telepathically summon a Tesla, which he answered, "Of course."