SpaceX has moved its scheduled Starlink satellite launch, carrying the next batch of 60 satellites, to Thursday, September 3.

In a post on Twitter, representatives for the company wrote: "Now targeting Thursday, September 3 at 8:46 a.m. EDT for launch of Starlink from Launch Complex 39A, pending Range acceptance—team is using additional time for data review." The "Range" in the post is the US Space Force's Eastern Range, which is in charge of launches coming from the East Coast.

According to the Kennedy Space Center launches and events website, the upcoming SpaceX Starlink-11 mission is the 12th mission to bring the Starlink satellites into space. The satellite constellation, which saw its maiden launch in February 2018, aims to provide reliable Internet services around the world.

SpaceX representatives made the announcement to the public through its official Twitter account. ""Standing down from today's launch of Starlink due to inclement weather during pre-flight operations," the August 30 announcement wrote. It added that the next target was on Tuesday, September 1, at 9:29 AM EDT.

Standing down from today's launch of Starlink due to inclement weather during pre-flight operations. Next launch opportunity is Tuesday, September 1 at 9:29 a.m. EDT, pending Range acceptance — SpaceX (@SpaceX) August 30, 2020

Earlier today, the space company has again announced its new target schedule on September 3. SpaceX will also attempt to land the first stage of the Falcon 9 rocket on a ship in the middle of the ocean.

The Thursday, September 3 launch follows its previous mission which successfully launched 58 Starlink satellites into orbit. A Falcon 9 rocket also lofted the satellites on August 18, from Cape Canaveral Air Force Station, also in Florida. The 11th Starlink mission also marked the aeronautics company's 100th mission since its 2002 founding, as well as the sixth launch of the Falcon 9 - setting a record for the most missions carried out by a single orbital rocket.

Although the 12th Starlink mission was rescheduled at a later date, SpaceX had another project successfully conducted on the same day, August 30. Despite the threats of a low pressure system crossing over The Sunshine State, the space company was able to launch another Falcon 9 rocket. The thrice-used rocket carried another Earth-observation satellite, this time for Argentina's space agency, plus two other satellites. 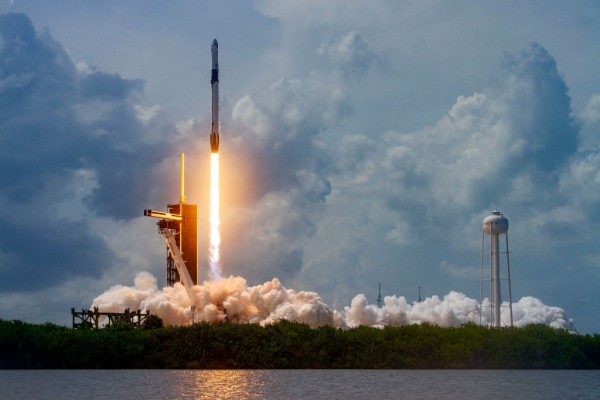 (Photo : Photo by SpaceX via Getty Images)
CAPE CANAVERAL, FLORIDA - MAY 30: In this SpaceX handout image, a Falcon 9 rocket carrying the company's Crew Dragon spacecraft launches on the Demo-2 mission to the International Space Station with NASA astronauts Robert Behnken and Douglas Hurley onboard at Launch Complex 39A May 30, 2020, at the Kennedy Space Center, Cape Canaveral, Florida.

Only at 7:18 PM ET on Sunday did the launch-site receive a green light for its weather condition, commencing launch and setting records in the process. It will be the 100th rocket launch for SpaceX, coinciding with a successful rare polar corridor mission. Its launch location, Florida, is optimized for equatorial launches. The SpaceX launch was the first launch into a polar orbit since 1969 - a weather satellite from the Environmental Science Services Administration, a forerunner for the NOAA.

Also, as the Falcon 9 rocket carried its payload, the booster's first stage was able to land successfully. About nine minutes after take off, the first stage of the booster returned and landed at SpaceX's Landing Zone-1 (LZ-1), also at Cape Canaveral.

Elon Musk: Becoming an Interstellar Is The 'Greatest Filter’ For Humans