China continues to expand its Earth observation satellites with the latest Gaofen 11 satellite, carried to orbit by a Chinese Long March 4B rocket on Monday, September 7.

The Long March 4B was launched from Base 25, or the Taiyuan Satellite Launch Center, located northwest of China's Shaanxi province. Its primary payload was the Gaofen 11 (02), a high-resolution Earth observation satellite that can capture images and distinguish details smaller than 3 feet wide.

While the satellite launch was successful, the first stage for the Long March 4B's booster narrowly missed a school after detaching from the craft and falling back to Earth.

Amateur footage shortly after the launch, taken by residents and uploaded in the Chinese social media platform Weibo, featured the Long March 4B first stage falling to Earth. The next footage showed orange smoke billowing from the site where the spent booster stage later exploded.

Another uploaded footage showed the same orange smoke, but the vantage point being a nearby school. The uploaded footage was supposedly near Lilong Village in Gaoyao, a town in Shaanxi province's Luonan county.

The first stage of the Long March 4B, as well as its four side boosters, uses a hypergolic combination of hydrazine and nitrogen tetroxide as its propellant. However, the combination is toxic and can cause serious health risks upon contact with either substance. 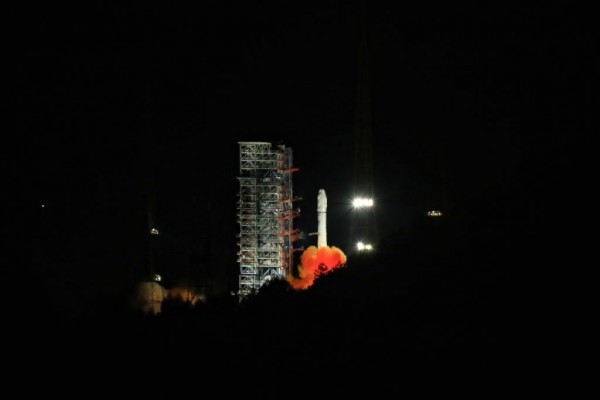 Launches from inland sites tend to fall near inhabited areas. However, locations expected to be at risk of launch debris are warned and usually evacuated ahead of launch.

Gaofen 11 is a series of high-resolution optical Earth observation satellites, a part of the larger Gaofen project. Gaofen satellites are parts of the state-sponsored China High-definition Earth Observation System (CHEOS).

The recent Gaofen 11 (02) satellite was developed and built by the China Aerospace Science and Technology Corporation (CASC). One of CASC's subsidiary institutes, the Shanghai Academy of Spaceflight Technology, is in charge of manufacturing the Long March 4B rocket. Its main manufacturing facilities are in Beijing and Shanghai.

This recent launch marks the 25th for the Asian technological and industrial giant in 2020 alone. On Sunday, September 6, state-owned press agency Xinhua News Agency reported about a largely secretive experimental spacecraft successfully landing after a two-day Earth orbit flight. According to the news release, a Long March 2F lifted off from the Jiuquan Satellite Launch Center last September 4, carrying the mysterious craft into orbit.

In this year alone, China was able to officially commission the BeiDou-3 (BDS) system, the latest part of their BeiDou Navigation Satellite System. The last satellite to complete the BDS-3 constellation was carried by a Long March 3B from the Xichang Satellite Launch Center.