Hurricane Laura, ranked Category 4, left behind destruction in Louisiana and Texas with winds reaching up to 150 miles per hour. The hurricane also left something else behind, deadly swarms of mosquitoes that have been killing animals in Louisiana. 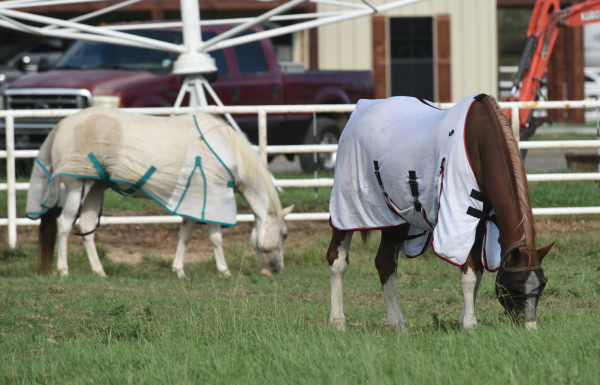 Several farm animals like cattle and horses, as well as deer, have died due to too many mosquitoes sucking on their blood. The hordes of mosquitoes leave the animals anemic and constantly bleeding, and they become exhausted from constantly moving to avoid the pests.

It is typical that hurricanes are followed by large mosquito populations. This occurs when eggs laid in the floodwater from previous floods begin to hatch. Adult mosquitoes, on the other hand, are less likely to survive the harsh winds from the storm.

There had been reports of up to 30 deers lost in a single deer ranch. So far, the farmer's goats were one of the few farm animals that have been sprayed with insecticide. He lost nearly $100,000 for his loss out of 110 animals.

Veterinarian Craig Fontenot from Ville Platte, Louisiana shared that the mosquitoes were pushed out of the marshes after Hurricane Laura. Nearly 300 to 400 cattle were already reported dead.

Authorities are currently working on mass insecticide spraying all over the state to get rid of the 'vicious little suckers,' as described by Dr. Fontenot. Earlier this month he also shared a photo of a bull that had its belly covered with mosquitoes.

Livestock specialist Vince Deshotel from Louisiana State University's Agricultural Center shared that he lost a bull several days ago. He said that a lot of the cattle showed signs of stress and it was made worse by the heat and increased mosquito populations. The animals also could not get enough oxygen, explained Dr. Fontenot.

Jeremy Hebert from the AgCenter said that the large-scale, airplane 'spraying has dropped the populations tremendously. It's made a night-and-day difference' in Acadia County and, but four other counties are still struggling with the surplus number of mosquitoes.

Similarly, there was a large outbreak of the West Nile Virus in Louisiana and Mississippi after Hurricane Katrina back in 2005. There were also large swarms of mosquitoes in Texas after Hurricane Harvey in 2017.

The mosquito species are not the kind that transmits diseases to humans. However, there are so many of them that they can cover your legs completely if you're wearing shorts, shared Hebert. While people could cover up with long clothing and take other preventive measures, the farm animals are left defenseless.

'Basically, there are many products that can be applied to the animals, either in a spray, spot-on or with back rubs,' shared Dr. Christine Navver from the AgCenter. 'It will depend on what is available locally and what works for the situation.'

There are also specific products approved for food-producing animals such as cows. Other ways to protect farm animals include coverings and fans.

Check out more news and information on Mosquitoes on Science Times.