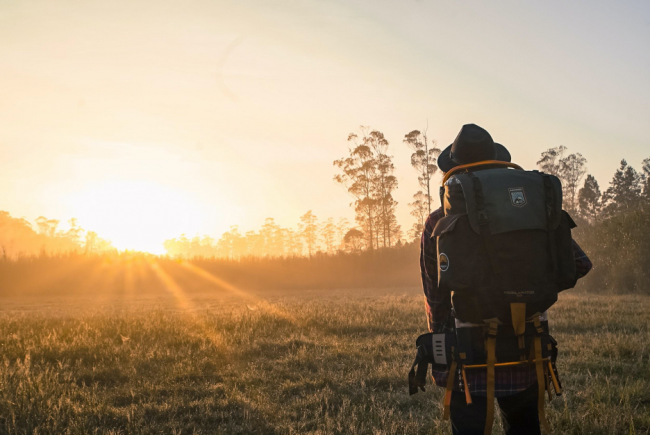 My passion for discovering the unknown and pushing myself to the limits has granted me the vibrant life I lead today. I am proud to say I have accomplished some of the world's most daring adventures as a mountaineer scaling the tallest mountains on every continent, battling my own limitations, and finding the strength to push myself and motivate others along the way.

As a mountaineer, naturalist, speaker, author, and impact investor, I have been fortunate to make connections with some of the world's brightest, most influential individuals. I am a member of the famed Explorer's Club, a multidisciplinary international society working to advance and preserve the environment through field exploration and scientific discoveries. I was accepted into the Explorer's Club in 2005 after completing a scientific expedition on Mount Kilimanjaro to identify and study extremophiles in one of the mountain's vast, arid craters.

In my professional career, I was an investment banker on Wall Street with J.P. Morgan before founding Iconic Development, a real estate development firm dedicated to improving the multi-family and student housing spaces. However, of my professional accomplishments, I am most proud of my current role as co-founder and CEO of Denali Venture Philanthropy.

At Denali, we strive to identify those small businesses and startups who are committed to addressing some of the planet's most pressing environmental and social problems. After experiencing many cultures on my journeys, seeing first-hand the obstacles facing communities in far-off countries around the world, and understanding that I could make an impact not only on those communities, but on the environment in which we all live, I was eager to give more.

It is in this spirit that I am proud to announce that I have recently joined the advisory board of Adventure Scientists, an organization that brings together the outdoor adventure and environmental research communities for one common goal-addressing critical human and environmental health challenges through data-driven research missions.

Adventure Scientists is a non-profit organization founded in 2011 that invites and encourages thousands of volunteer explorers from around the world to collect information from some of the most remote areas of the planet. Alongside researchers, explorers work tirelessly to identify and collect scientific data from atop the highest peaks to the deepest depths of the oceans.

All data collected is made available to scientists and researchers, and much of the data is open-source, for members of the public to help work toward the common goal of addressing critical environmental and human health challenges.

My role as a member of the Adventure Scientists Advisory Board will allow me to better identify and invest in impact entrepreneurs, turning their dreams into realities, and contribute to wider movements aiming to improve our planet. Let's take a look at a few of the initiatives that have caught my eye for their innovation and impact.

In many countries around the world, illegal logging occurs at alarming rates-the Democratic Republic of the Congo sees 65% of its logging conducted illegally each year, while in Myanmar and Peru that climbs to over 80%, according to the World Wildlife Federation. Because of the increased demand for paper, timber, and related products, the illegal timber trade is one of the most concerning, given its fostering of climate change and demolition of environmental biodiversity.

The Timber Tracking Project sees a group of Adventure Scientist volunteers and researchers collect data samples from some of the most uninhabited and inaccessible reaches of planet earth. In 2018, volunteers even trekked over 2,300 miles to help protect the bigleaf maple from being illegally cut down and trafficked.

It is estimated that 15-30% of all timber on the international market is illegally sourced, and since the issue is not apparent at first glance, the ecological and social consequences of the practice are dangerous for our global economy.

When a tree is illegally chopped down and shipped to other parts of the world, the species living within those trees, the soil from which it was stripped, and the surrounding environment all suffer. Without those trees, the forests suffer, halting the conversion of CO2 to oxygen and increasing global carbon emissions.

The illegal timber trade has also been tied to organized crime and the violation of indigenous rights, with even responsible timber producers losing billions of dollars of annual revenue to such illegal trade practices.

The 2018 Timber Tracking Project launched with a focus on the protection of the bigleaf maple in its natural area along the coast of the American Pacific Northwest. The project allowed Adventure Scientist volunteers and researchers to collect DNA samples from trees all along the entire western coast of the U.S. and Canada. Identifying the origins of these trees helped combat illegal logging through innovative DNA-based technologies, and enabled law enforcement officials to identify and prosecute poachers, halting the deforestation of this unique and beautiful species in its tracks.

In 2019-2020, the organization increased its efforts to protect three additional tree species in the western United States-the coast redwood, western redcedar, and Alaska yellow-cedar. Each of these species of tree is in very high demand, and are thus at elevated risk of being cut down illegally. However, through data tracking and analysis, Adventure Scientists is helping law enforcement officials preserve the biological and cultural value that these trees provide.

As part of a mission to protect Montana's wildlife, Adventure Scientists recently partnered with the Montana Department of Transportation and Montana Fish, Wildlife & Parks to enlist volunteer road cyclists to collect data from the sites of vehicular collisions with animals.

Every year, in the United States alone, there are more than 365 million animals killed, 29,000 people injured, and $8.4 billion in damages resulting from wildlife-vehicle collisions. With new roads ever being constructed, natural wildlife habitats are being disrupted and animals hindered in learning how to navigate the changing space.

The goal of this project is to help humans and wildlife co-exist, understanding that man-made roads and trails are becoming more and more crowded.  Volunteer cyclists will ride 11,000 miles of Montana roads several times a year for the next three years, documenting wildlife sightings and roadkill. And, as we are still facing social-distancing due to COVID-19, the innate social-distancing required in road cycling with a single partner makes it a great way to participate in science while staying safe.

As our climate changes, the future of our food supply is at put at greater risk. Farmers around the world are already struggling with severe heat and prolonged droughts. One of Adventure Scientists' earliest projects helped microbiologist Rusty Rodriquez identify a new way to help crops survive, using a biological trick that allows plants to grow in some of the world's most extreme environments.

For the project, mountaineers Willie and Damian Benegas collected the highest known plant life on earth from Mount Everest's slopes. Rodriquez determined that fungi living in a symbiotic relationship with the plant enabled the plant to survive in such an extreme environment. The fungus and others in its family may have applications to our food crops, making them resistant to heat and drought. To date, that specific discovery has increased crop yields across more than three million acres of farmland, including on more than 300 farms in India.

The symbiotic relationship found between these extreme living organisms has already begun to provide answers on maintaining food crops in the face of climate change and increased population pressures.

Joining the advisory board of this incredible organization is such a privilege. I am thrilled to unite my expertise in identifying meaningful and sustainable investment opportunities with the empowerment of outdoor adventurers while providing significant data-driven results to heal and protect our environment. Confronting the social and environmental issues that plague our world is an important mission of mine that I look forward to continuing in my work with Adventure Scientists.