On August 25, 2020, the Hubble's near-infrared and imaging and ultraviolet views showed changing cloud patterns with mixed blue, pink, white, and red colors. The photo captures parts of the planet's atmosphere at a higher altitude. 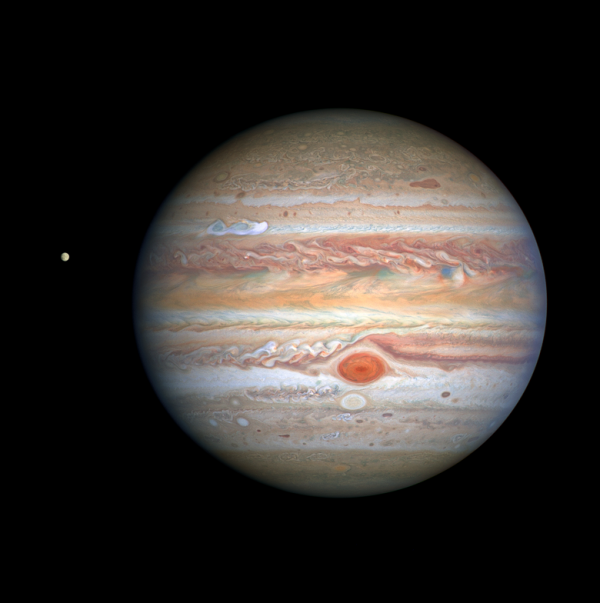 The gas giant has mostly reddish-colored areas at its equator, north, and south poles due to atmospheric particles (hydrocarbon) being absorbed by ultraviolet light. "The blue-hued areas represent the ultraviolet light being reflected off the planet," writes the description of the image.

At the upper left side of Jupiter, scientists noticed a new storm that erupted on August 18 with evidence of it lasting longer than typical storms. The initial plume was followed by two more in the same region. Researchers reported that the new storm is traveling at about 350 miles per hour.

They also captured images of the Great Red Spot and Red Spot Jr. According to NASA, the storm may change the color of the region where the two spots are. Experts believe that the giant storm existed since the 1600s, but was first observed in 1830.

The Great Red Spot ranges from rich red to a deeper red as it rolls counterclockwise. It is a high-pressure region that produces an anticyclonic storm. Anticyclonic storms occur when pressure pushes down towards the planet's surface and typically do not produce precipitation compared to cyclones.

Even though Jupiter's largest storm only measures 9,800 miles across, NASA reported that it is "big enough to swallow Earth." Telescopic observations since 1930 revealed that the super-storm had been continuously shrinking for reasons unknown.

Red Spot Jr., which lies slightly south of the Great Red Spot, is about half the size of the larger storm. The new spot was first observed to be growing around the year 2000 after three smaller spots merged.

The images also show parts of Jupiter's moon, Europa, on the left side of the planet. Europa is one of the top candidates of habitable worlds alongside other moons and exoplanets.

Planetary scientists Mohit Melwani Daswani and Steven Vance recently led a study explaining a salt-like substance, also detected by the Hubble, that its oceans left behind. Traces of chloride may mean that the moon's oceans were similar in composition to Earth's waters. John Grunsfeld from NASA shared regarding the 2015 mission to search for life on the moon shared that "Europa has tantalized us with its enigmatic icy surface and evidence of a vast ocean," from data gathered by the Galileo spacecraft years before as well as Hubble observations.

NASA will be launching the Europa Clipper to explore the moon and to search for more evidence of signs of life. Scientists hope that findings will confirm the existence of water plumes observed in 2012 and they are linked to an ocean beneath the surface.

Check out more news and information on Jupiter on Science Times.