Artificial intelligence (AI) and deep learning models can help advance research on neural degeneration, showing its capabilities in identifying and categorizing its forms on a model organism.

Using the organism Caenorhabditis elegans or the roundworm - a 1-millimeter near-transparent nematode - researchers used deep learning to conduct a quantitative image-based analysis of neural degeneration patterns observed in the PVD neuron of the organism.

Researchers from North Carolina State University have detailed their work in the journal BMC Biology, September 23. 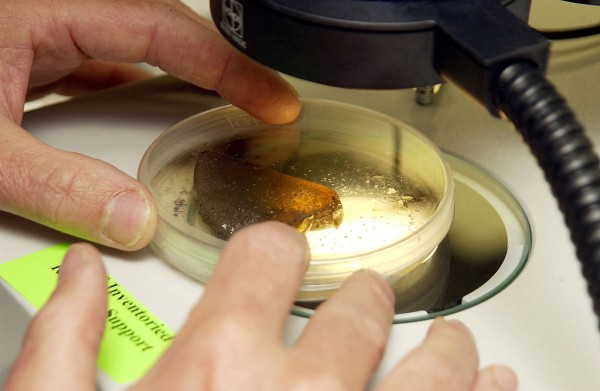 (Photo: Photo by Volker Kern/NASA/Getty Images)
KENNEDY SPACE CENTER, FL - MAY 1: A petri dish containing C. elegans nemotodes, or roundworms, is prepared for examination by project scientists May 1, 2003, at the Kennedy Space Center in Florida. The worms were found alive last week in a biological container that was among the debris from the Space Shuttle Columbia recovered in East Texas. The worms are descendants of those that were part of an experiment that flew on Columbia's last mission before the spacecraft broke up on reentry February 1, killing all seven astronauts.

"Researchers want to study the mechanisms that drive neural degeneration, with the long-term goal of finding ways to slow or prevent the degeneration associated with age or disease," explained Adriana San Miguel in a NCSU news release. San Miguel serves as the corresponding author on the study, as well as a chemical and biomolecular assistant professor. She stressed that their work demonstrates the capability of deep learning in identifying symptoms of neural degeneration, can perform faster than humans, and even distinguish based on causes.

RELATED: Scientists Found a Way to Tweak Proteins That Prolongs Life of Roundworms, Will It Work on Humans Too?

Researchers focused on the roundworm, a model organism often used in the study of the development and aging of the nervous system. Specifically, they trained the deep learning model to identify characteristics exhibited by the roundworm's PVD neurons - nerves that can sense temperature and texture. It was also chosen by the researchers due to its ubiquitous presence in the roundworm, as well as previous studies showing that this particular type of nerve cell degenerates with age.

Furthermore, as roundworms are transparent, researchers can observe their nervous systems while they are alive, without the need to dissect them. Degeneration can be observed in C. elegans through microscopically scouting for changes in the cell - often taking the form of bubbles on individual nerve cells. The size, quantity, and position of these bubbles are then noted as markers of the progress of the neural degeneration.

Deep Learning as a Research Tool

According to Kevin Flores, co-author of the study and a mathematics assistant professor, "Counting these bubbles is a time-consuming and labor-intensive process." With a deep learning model, they can collect the data they need "in a matter of seconds." To achieve this, they combined deep learning with GPU computing - using the processing speed of a graphics processing unit in support of conventional CPU - that allows for a faster assessment of neuronal degeneration.

"We also found that neural degeneration caused by cold shock had a different pattern of bubbles than the degeneration caused by aging," San Miguel noted, adding that it was difficult, if not impossible, to note those differences with the traditional methods. He even noted that the deep learning program was consistent in its findings.

He added: "This work tells us that deep learning tools are able to spot patterns we may be missing."

Check out more news and information on Deep Learning in Science Times.