A recent study of tree rings from Norilsk in the Russian Arctic and east of the Yenisei River, the largest of its kind to date, strongly suggests that man-made pollution is a lot worse than previously thought.

Researchers, led by members from the University of Cambridge, have examined both ring width and wood chemistry measurements - both from dead and living trees - coupled with soil characteristic studies and computer modeling. The study examines the environmental damage caused by decades of copper and nickel mining - causing adverse effects to the local area as well as the global carbon cycle.

The damage caused by anthropogenic activities to the boreal forest - forests located in high latitude environments like the Arctic - are seen in the Norilsk trees, where the die-off has reportedly spread to 100 kilometers or over 62 miles.

The details of their study are published in the journal Ecology Letters, September 25. 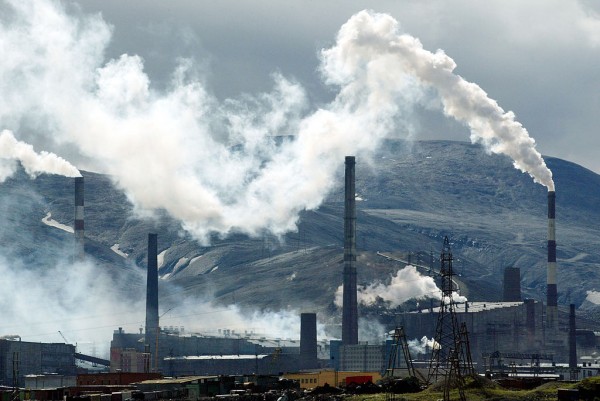 (Photo: Photo by Oleg Nikishin/Getty Images)
NORILSK, RUSSIA - JULY 21: Smokestacks for a nickel-refinery spew sulfur dioxide into the environment July 21, 2002, in Norilsk, Russia. The refinery releases some 2.8 million metric tons of sulfur dioxide per year into the atmosphere, six times the emissions of the entire U.S. nonferrous metals industry. In total, Norilsk produces over 90 percent of Russia's nickel, 58 percent of copper, over 80 percent of cobalt, and almost 100 percent of the platinum-group metals.

An Attempt to Explain the Dendrochronology Divergence Problem

Norilsk, the Russian city inside the Arctic circle, is one of the world's northernmost cities. It was officially founded in 1935 when its initial settlements were expanded to accommodate a mining complex - focusing on the extraction of rich nickel, copper, and palladium veins. Few environmental regulations led to severe pollution levels over the years. Additionally, the Norilsk diesel oil spill flooded local rivers with an estimated 17,500 tons of diesel oil, adding to the environmental damage in the area.

The airborne emissions of the Norilsk mining-metallurgical complex have not only damaged an estimated 24,000 square kilometers of Siberian taiga, but also other trees in other high latitude areas. It has been observed that the increasing pollution leads to decreasing tree volume, which in turn reduces the amount of carbon that these regions produce.

One of the persisting problems in dendrochronology - the scientific method of dating trees from their tree rings - is what they call the "divergence problem." It is a popular anomaly in the field, characterized by the decoupling of tree ring widths from increasing air temperatures that have been noted since the 1970s.

Researchers have used the largest dataset of tree rings in the region to date, in an attempt to reconstruct the forest dieback in the Russian region. Aside from the damage caused by the mining complex over the years, researchers also discovered that the air pollution in the area is partly responsible for the "Arctic dimming" phenomenon, supporting a possible theory that explains the divergence problem.

"Using the information stored in thousands of tree rings, we can see the effects of Norilsk's uncontrolled environmental disaster over the past nine decades," said Ulf Büntgen, lead researcher from Cambridge University's geography department. Büntgen explained that the impact  has not been fully understood due to the unavailability of "long-term monitoring data."

"We can see that the trees near Norilsk started to die off massively in the 1960s due to rising pollution levels," Büntgen further explained. Citing large-scale circulation patterns, especially in the region, researchers took to analyzing trees outside the original scope of Norilsk's mining complex, arriving at the discovery that other boreal forest sections also suffered.

RELATED: Acidification on the Arctic Ocean Is Worse Than Expected Threatening Calcifying Organisms and the Food Chain

Check out more news and information on Tree Rings in Science Times.