A hospital-themed restaurant in Las Vegas, called the Heart Attack Grill, is famous for its menu of an unhealthy diet, particularly on its enormous hamburgers. Customers are referred to as patients while their orders are called prescriptions, and the waitresses are dressed as nurses.

"Patients" who weigh over 350 pounds are invited to unlimited free food as long as they weigh themselves on an electronic cattle weighing scale in front of a cheering crowd.

'Cremains' of the Past Customer

Heart Attack Grill was founded by Jon Basso, also known as Dr. Jon, in 2005. Indeed, the restaurant's food is not healthy and even holds a Guinness World Record for the World's Most Calorific Burger with the Quadruple Bypass Burger, which has a total of 9,983 calories.

The menu is linked to customers who died of cardiac arrest while eating in the restaurant. But now, the Heart Attack Grill has added a whole new concept of marketing by displaying cremated remains of their past customer who died at the restaurant while eating.

Jon Basso, who sports a doctor's coat and stethoscope, said that the restaurant is putting the cremains clearly on the table and hope that other fast-food chains such as the Burger King to do the same.

He said that this new marketing strategy is because he does not believe in the claims of fast food chains that it is possible to eat healthily at their restaurants. He even said that although there were customers who died in his restaurant, he does not want it to happen again.

He hoped that one day he would wake up and see no one customer would ever come back to his establishment after learning the truth of fast-food restaurants.

"I say it boldly: Don't come to my restaurant-it's bad for you and will kill you," Basso says. 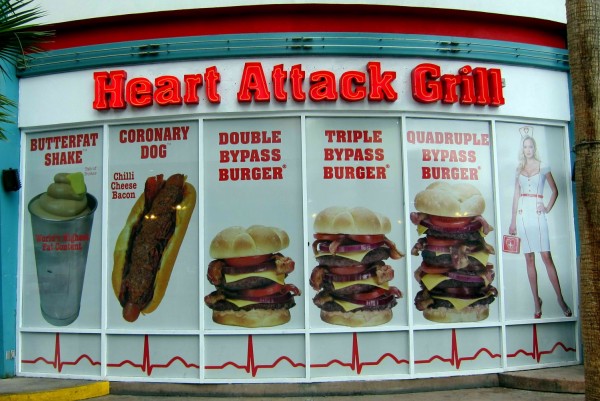 A poor-quality diet, such as eating junk foods or fast food, is linked to a higher risk of developing adverse health conditions. A person becomes more prone to have depression, digestive issues, heart disease, obesity, cancer, stroke, type 2 diabetes, and early death. The frequency of eating such a diet matters a lot when it comes to the impact it may have on the person's health.

Indeed, it is alarming data considering that most Americans eat fast food at least once a week.

Check out more news information about Heart Health only on Science Times.