Wildlife experts worry over shark populations that are in danger as international companies continue to develop coronavirus vaccines. Sharks produce squalene, a substance in their livers, which is harvested as an ingredient for vaccines such as influenza and malaria vaccines.

Human livers also produce squalene, which naturally runs in the bloodstream, and can also be found in plants and other animals. Commercially, it can be extracted from fish oil and most commonly from shark liver oil. Sharks have more oil in their livers as it helps regulate their buoyancy in deep waters.

The substance acts as an emulsifier for vaccines to be more immunogenic or effective in triggering an immune response, also as a vaccine booster or adjuvant. Adjuvants also prolong the efficacy of antibodies produced by vaccines.

Apparently, some companies are also using squalene in several coronavirus vaccine candidates. According to the non-profit organization Shark Allies, around half a million sharks may be slaughtered in order to extract enough squalene for Covid-19 vaccines.

Currently, five coronavirus vaccine candidates have adjuvants with squalene harvested from sharks. Shark Allies currently has a petition addressed to the U.S. Food and Drug Administration, European regulators, China's National Medical Products Administration, and vaccine developers to stop the use of shark squalene in the pharmaceutical industry.

Founder Stefanie Brendl shared that anything harvested from wild animals is not sustainable, especially since may shark species are endangered. With the end of the pandemic unknown, she fears that the use of shark squalene may continue to increase per year.

She also clarified that by no means is the organization against the pursuit of vaccine developments but they just hope that companies would test "non-animal derived squalene...alongside shark squalene so that it can be replaced as soon as possible." With billions of doses needed each year for the coronavirus once safe vaccines are available, continuously hunting sharks for squalene can be detrimental for their species, shared Brendl.

The organization also pointed out that "shark squalene is not a unique or "magical" ingredient." The substance, comprised of carbon-hydrogen chains can be found in non-animal alternatives such as yeast, olive oil, bacteria, and possible algae. For example, the biotechnology company Amyris produces squalene from sugarcane to create cosmetic products.

Sharks are typically hunted in countries that lack regulations protecting the species such as nations in South Pacific Asia. Shark liver oil is also used in products such as lip gloss, sunscreen, and anti-aging creams.

Wildlife experts estimate that nearly three million sharks are killed yearly to extract squalene. to produce about one ton of squalene, nearly 3,000 sharks are killed. Some of the most vulnerable shark species hunted for squalene include the gulper shark and basking shark. 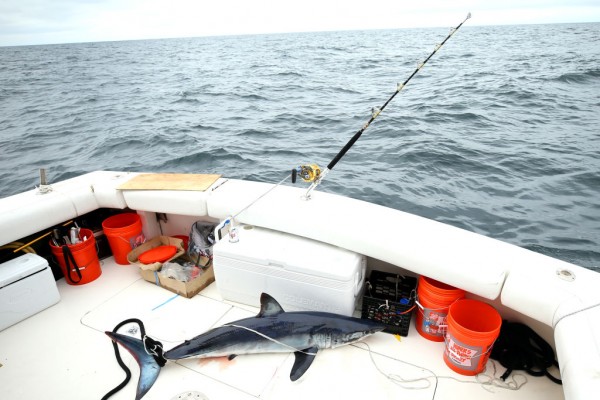 Read Also: The Evolution of Angel Sharks Explain Their Risk of Extinction

Check out more news and information on Sharks on Science Times.