Planetary scientists and artificial intelligence (AI) researchers have collaborated on a machine learning tool that helped discover new craters on Mars - including small impacts left by a meteor about eight years ago.

Between March 2010 and May 2012, a meteor flew over Mars, burned, and eventually disintegrated into smaller pieces that crashed into the planet's surface. This left unusually small - and relatively easy to miss, at only 4 meters (13 feet) wide - craters. With the help of its AI-driven tool, NASA scientists at the Jet Propulsion Laboratory (JPL) in Pasadena, California are looking forward to reduced lead time and increased findings on the Red Planet's surface. 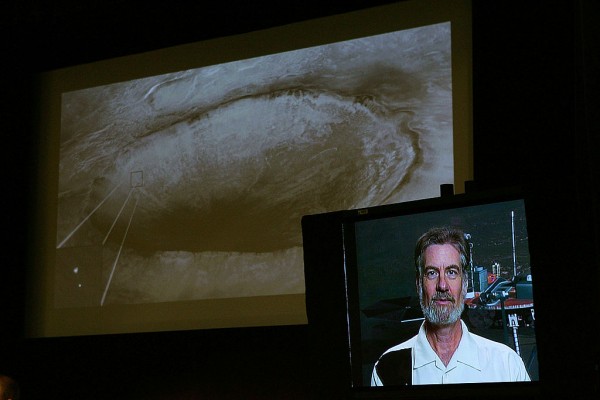 (Photo: Photo by David McNew/Getty Images)
PASADENA, CA - MAY 27: Principal Investigator, HiRise Camera on Mars Reconnaissance Orbiter, Brian Portock talks to reporters in front of an image of a crater taken during the descent of the Phoenix Mars Lander during an update briefing, two days after landing in a northern polar region of Mars, at NASA's Jet Propulsion Laboratory (JPL) on May 27, 2008, in Pasadena, California. The Phoenix Mars Lander is the newest hope in the search for signs of life on Mars. Fewer than half of the Mars missions have made successful landings. At a cost of $420 million, the Phoenix Mars Lander has flown 422 million miles since leaving Earth in August 2007.

Hours After Hours of Studying Images

Usually, NASA scientists have to manually analyze the images taken by the Mars Reconnaissance Orbiter (MRO) in search of uncommon phenomena in the Red Planet's surface - avalanche, shifting sand dunes, dust devils, and more. Throughout the MRO's 14-year service, it has provided data that allowed the space agency to find more than 1,000 craters. Most of these discoveries begin with the Context Camera installed in the orbiter, taking extremely large yet low-resolution images of the planet's surface, covering hundreds of miles per shot.

In Mars Orbiter Camera images, new boulder tracks were thought to have formed here between Nov 2003 and Dec 2004, but an earlier HiRISE image checked this location and did not find anything. https://t.co/RkZEp3HKdJ

Craters are detected through their blast marks, making them visible from the low-res images. However, the craters themselves remain virtually invisible, which leads to the next process. Using the High-Resolution Imaging Experiment (HiRISE). It provides clearer, more detailed pictures of the target. In fact, its vision system can detect even the tracks left behind by the Curiosity rover. Additionally, the research team allows the public to put in their specific request through the HiRISE HiWish website.

This next process, according to a NASA press release, takes around 40 minutes for a researcher to go through a single Context Camera image. To cut the time required, the JPL team created a machine learning tool called the Automated Fresh Impact Crater Classifier. The AI tool is a part of a wider effort among Jet Propulsion Laboratory scientists called COSMIC - for Capturing Onboard Summarization to Monitor Image Change - that aims to continuously improve Mars orbiters.

JPL researchers trained the crater classifier by providing it with a total of 6,830 Context Camera images, including locations that contained impacts already identified and confirmed by HiRISE. The images provided to the machine learning tool also included images with no impacts, to also train the tool to identify what not to look for.

After the training phase, the crater classifier was deployed on Context Camera's repository of more than 100,000 pictures. A process that used to take 40 minutes is now accomplished on an average of 5 seconds, thanks to a set of high-performance computers operating in parallel within JPL's supercomputer cluster.

"It wouldn't be possible to process over 112,000 images in a reasonable amount of time without distributing the work across many computers," explained Gary Doran, a computer scientist at JPL. The team was challenged at first with running 750 copies of the classifier across the entire cluster.

However, a human operator still checks the data returned by the AI tool. Kiri Wagstaff, also a JPL computer scientist, explained that AI tools still can't do the "skilled analysis" that a scientist can do.