In 2014, thousands of residents in Toledo, Ohio, experienced a water crisis after it was announced that the toxin microcystin was discovered in the water supply due to algal blooms in Lake Erie. In 2019, researchers from the University of Toledo, led by Dr. Jason Huntley, identified a naturally-occurring bacteria in the lake that removes microcystin.

The publication of their initial research is found in the Journal of Great Lakes Research. This year, his team just received a $1.1 million grant from the National Oceanic and Atmospheric Administration (NOAA) to advance their research and develop solutions for global problems.

Microcystin is a toxin produced by cyanobacteria that can poison other marine life and contaminate drinking water sourced from freshwater lakes. Algal blooms, or the rapid increase of algae in aquatic systems, caused by global warming, have increased the toxicants released by algae.

After studying local water samples from various locations at Lake Erie between 2014 and 2015, his team discovered that bacteria could treat water from the lake. Lake water is commonly treated with activated carbon adsorption and chlorination for the water to become potable, but are costly methods. These treatment methods can also not fully filter freshwaters, such as the removal of micropollutants and hazardous waste.

Dr. Huntley's team developed biofilters with sand filters containing active bacteria. The bacteria have enzymes that can break down microcystin.

The biofilters are also cost-effective and are safer than conventional chemical treatments, shared Huntley. The filters have proven to remove algal toxin levels significantly greater than the World Health Organization guidelines. 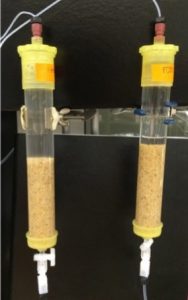 According to the WHO, safe microcystin concentrations in drinking water is one microgram per liter. Ingestion of high concentrations of microcystin can lead to compromised liver function or skin allergies. Researchers from Brain Chemistry labs have also linked exposure to cyanobacterial toxins with neurological diseases such as Alzheimer's and ALS.

The team's goal is to upscale their laboratory experiments and test the bacteria in a water treatment plant. Huntley said that their researcher is not just for the sake of scientific discovery, "but to ask questions about how it can improve human health."

Algal blooms occur all over the United States and in aquatic systems worldwide. The bacteria-containing biofilters "is a solution to a global health problem."

Huntley explained that it is cheap to grow the bacteria that degrade microcystin. They can be easily grown in water. Aside from using them to filter freshwater, they can also be placed in water treatment byproducts usually sent to landfills or disposed of as waste products.

Before upscaling the biofilters, the team needs to conduct further research on testing the bacteria in various water conditions. They also need to identify the specific bacterial enzymes so they can be mass-produced. Part of the long-term goal is developing water treatment tablets or droplet bottles to filter lake water for travelers efficiently.

Check out more news and information on Water Filter on Science Times.