Opposition: The Time When Mars is Up All Night

Mars will be at its brightest on October 13 due to an event called opposition; it is a time when Mars and the Sun are at the opposite sides of the Earth. Since it also takes place during the New Moon, Mars will be shining brighter than usual.

The last opposition happened on July 27, 2018, and this year's event will take place at around 7 PM EDT when the Sun and Mars are in opposition, NASA said. According to assistant research planetary scientist Mikhail Kreslavsky from the University of California, Santa Cruz, viewing Mars on October 13 will be ideal without the hampering moonlight as the opposition coincides with the New Moon.

According to NPR, Mars's opposition is somewhat related to the 'Mars close approach' that happened on October 6, in which the red planet appeared to look bigger as the Earth and Mars come closer to each other.

Recently, there have been many Mars explorations from different countries like the Perseverance rover, the Tianwen-1 project, and United Arab Emirates' first mission ever to the red planet. 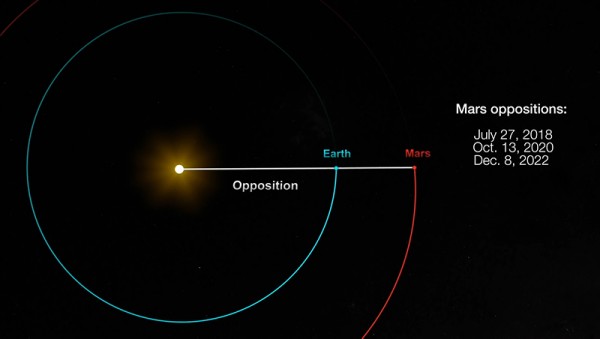 (Photo: NASA)
NASA's diagram of Mars opposition shows the Sun, the Earth, and Mars lining up every two years.

The Mars Opposition this Week

Since Earth finishes its orbit around the Sun in one year and two for Mars, the opposition happens every 26 months. Throughout this month, Mars has been the closest to the Earth outshining all the other stars even planet Jupiter which is the fourth brightest object in the sky after the Moon, Sun, and Venus.

Humans on Earth will be seeing the whole dayside of Mars this week, making it ideal for viewing. As the Mars is close to the new moon this year, it will shine brighter without the moonlight hampering, Kreslavsky said.

Oppositions happen because planets in the solar system do not orbit in a perfect circle around the Sun although it is nearly circular. But Mars and Earth have the same shape of the orbit, which is an eclipse.

This weeks' Mars opposition only lacks being extra-close but will still appear bright from a distance of 38.57 million miles (62.07 million kilometers) away from Earth.

Ultimately, October 2020 will show the red planet at its brightest until September 2035.

Read Also: A Mini-Armada of Space Explorers: China, UAE, and US are All Going to Mars this Summer!

Despite the delays on the projects for Mars exploration due to the pandemic, 2020 has become the year for the red planet. Three countries have launched their own exploration projects on the orbit and surface of Mars in hopes of learning more about the red planet.

This summer, the US, UAE, and China have launched a mini armada of space explorers on Mars. The US has sent the Perseverance rover which is set to land on Mars on February 2021. It is part of a major project that will help future human explorations of Mars by the year 2024.

Meanwhile, the United Arab Emirates has launched its first-ever space mission to Mars called Hope, or the Emirati Mars Mission(EMM)  is designed to study the atmosphere of Mars using its three unique cameras that can detect the visible, infrared, and ultraviolet wavelengths.

Lastly, China's Tianwen-1 was successfully launched to Mars n July 23 from Hainan, which carries an orbiter, lander, and rover to Mars. Reports said that the move from China would challenge the Mars exploration, which has been dominated by the US for more than half a century.