Animal lovers in Cuba are optimistic about the upcoming law as the Cuban government is set to pass its first animal protection law next month.

In April 2019, more than 400 animal lovers peacefully marched through the streets of Havana, the Cuban capital, in a first for the communist nation. It was a significant step for the island nation, that has generally prohibited public demonstrations not aligned with the ruling party.

Now, after a year and a half, the Cuban government is looking to pass its first law, with a report from AFP describing it as a "bid to wrestle the initiative from a movement with the potential to mushroom." 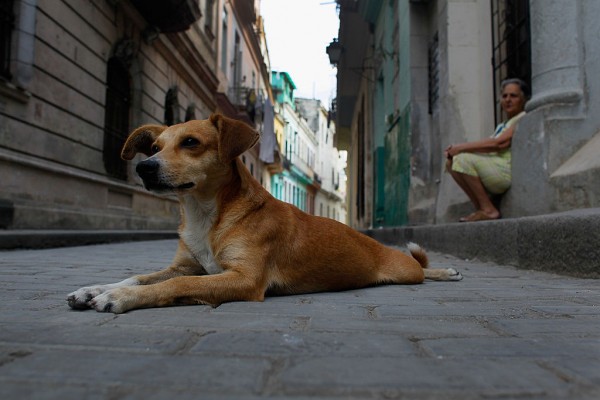 (Photo: Photo by Joe Raedle/Getty Images)
HAVANA, CUBA - MARCH 24: A dog lays in the street of Old Havana on March 24, 2012, in Havana, Cuba. Fourteen years after Pope John Paul II visited Cuba, Pope Benedict is scheduled to arrive in the communist country on Monday, March 26th. Benedict, who will be arriving from Mexico, will conduct a mass in the city of Santiago de Cuba first followed by a mass in Havana before leaving on the 28th. Tensions are high in Cuba between some dissidents and the government as activists hope the international exposure of the Papal visit will result in renewed attention to their struggle.

Animal lovers in Cuba have struggled with public behavior towards animals - with its streets filled with abandoned animals like cats and dogs. Furthermore, social distancing measures in the country following the global coronavirus pandemic have increased the instances of abandoned animals and put strays at more risk.

RELATED: The COVID-19 Pandemic Leads to Increase in Animal Abuse and Abandonment: Here's Why

"Yes, we have seen an increase in abandoned pets," said local animal rights activist Diana Arro in an interview with IPS Cuba. She noted animals still walking around - some of them plump and looking healthy, with their collars on, digging into dumpsters for food. Arro, also a volunteer from SAOS, a nonprofit that helps abandoned animals in Santiago de Cuba, cites some of their efforts to help these animals - including moving strays to shelters, and later to foster families, and encouraging the public to take their left-overs to key locations where animals can eat later.

Another issue in Cuba involves the Santeria cult - a local religion that fuses Catholic and Nigerian Yoruba concepts brought by slaves. Among the processes of its followers include animal sacrifice. Maria Gloria Vidal, president of the national animal welfare committee, explains that it is "practically impossible" to ban animal sacrifice due to its religious roots. However, she assured that they can work to at least "guarantee the wellbeing" of the animals that will be used in these rituals.

The animal sacrifice in Cuba is widespread such that carcasses of chickens or pigeons are commonly found in the streets of Havana, its most populous city. It is often done by the Cuban faithful to invoke the favor of gods in secret rituals that use small birds, but also goats, rams, rodents, and even cats and dogs.

In recent years, Cuba has seen an increase in animal awareness, most likely because of technological advancements. The prevalence of 3G internet on mobile phones and its subsequent access to social media has given the people a platform to promote animal rights, as well as other humanitarian causes.

Also, the growth of its private sector in the last decade has led to a new middle class, most of which have actively participated in the fight for animal rights. This middle class saw an increasing number of Cubans who can now afford pets, in turn creating an opportunity for canine salons in the capital.

According to Yisell Socorro, a ministry lawyer, the State Council will approve the Decree-Law, and will later be ratified by Cuba's National Assembly.

Check out more news and information on Animal Rights in Science Times.

Humans in New Guinea May Have Hatched, Raised Cassowaries 18,000 Years Ago